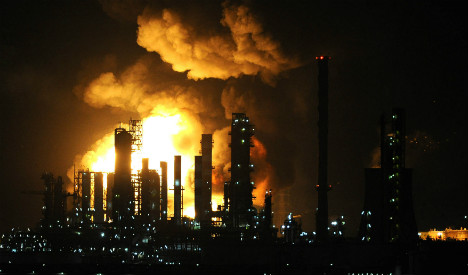 Flames arise after a fire broke out at the Mediterranean Refinery of Milazzo in Milazzo, near Messina on Sicily Island on September 27, 2014. AFP Photo/Giovanni Isolino

The blaze at the Milazzo refinery sent flames shooting into the night sky, which could be seen for miles around, according to local press reports.

Firefighters said they had brought the blaze "under control" by Saturday morning and no-one was injured.

The fire took hold in a 5,000-litre (22,700-gallon) tank at the facility jointly owned by Eni and Kuwait Petroleum Italy.

Residents ignored assurances from the emergency services that it would not spread and hundreds took to their cars in the darkness, causing long tailbacks on the island's roads.

The fire was still burning on Saturday, giving off a thick cloud of smoke. Firefighters said it would burn until the tank was empty.

Maintenance work was being carried out at the refinery when the blaze started, but the cause was not immediately clear.

Seven workers were killed at the refinery in an explosion in 1993.