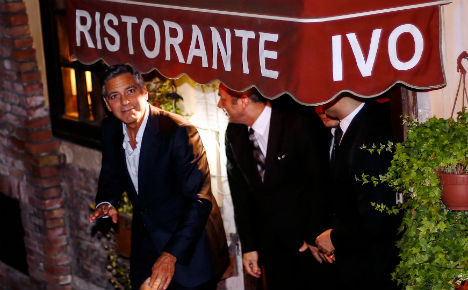 George Clooney (L) looks on as he leaves the restaurant Da Ivo with friends and his father during his stag night event in Venice on September 27, 2014. AFP Photo/Pierre Teyssot

The actor had swept into the floating city on Friday with his British fiancee Amal Alamuddin on a watertaxi dubbed "Amore", zipping up the Grand Canal to cheers from fans at the start of nuptials set to draw out over the weekend.

As evening approached and girls across the world sobbed, he set out in black tie for an all-boys do with friends to celebrate one of his last nights as a single man.

After shaking off paparazzi, Clooney headed to Da Ivo near Saint Mark's Square where his security detail was spotted lurking as the star and friends dined on the venue's prized Venetian and Tuscan delicacies.

He was then reported to have headed to the luxurious Cipriani hotel where he was set to sleep, but not before rounding off the evening with some shots and cigars.

The 53-year-old actor had 100 cases of his own tequila label flown in for his wedding and was expected to crack open bottles of the award-winning tipple at the stag party.

Clooney's Lebanon-born bride-to-be was spotted in a long red gown heading off to her own soiree at the fresco-adorned Aman hotel with close friends including Ellen Barkin — who threw the 36-year-old human rights lawyer a hen party several weeks ago.

Matt Damon, Cindy Crawford and her husband Rande Gerber — tipped to be Clooney's best man — were just a few of the stars in Venice for the wedding, with Brad Pitt, Angelina Jolie and musician Bono tipped to follow on Saturday.

The couple are expected to be officially married in a civil ceremony on Monday, but will have to work hard not to succumb to a hangover before then with a party for 130 or so guests at a reception on Saturday.

The rich and famous will be escorted by police boats to the exclusive seven-star Aman resort within the 450-year-old Palazzo Papadopoli to keep over-excited Clooney admirers and hundreds of photographers at a distance.

They'll be met with lashings of fizz and canapes in the garden, an oasis sheltered from the bustle of the canal, before sitting down in the main library to a sumptuous five-course dinner, according to a source close to the
hotel.

The Aman's restaurant will be turned into a nightclub where they'll dance the night away, with Lana Del Rey reportedly preparing to serenade the couple and Clooney dedicating the song "When I fall in Love" to Alamuddin.

A string orchestra and jazz trio are also expected to perform a number of songs, including the uber-romantic "Smoke gets in your eyes", a ballad made famous by The Platters in 1958.

Rome's former mayor Walter Veltroni, a long-term friend of Clooney's, will be performing the civil ceremony, which is likely to be held in the town hall, the stunning Ca' Farsetti 14th century palace opposite the Aman hotel.

Alamuddin moved to Britain as a three-year-old and her rights work has involved representing Wikileaks founder Julian Assange.

Clooney was married once before, to "Mad Men" actress Talia Balsam, but the pair split in 1993, just before his breakout role in "ER" propelled him to the
status of global sex symbol. 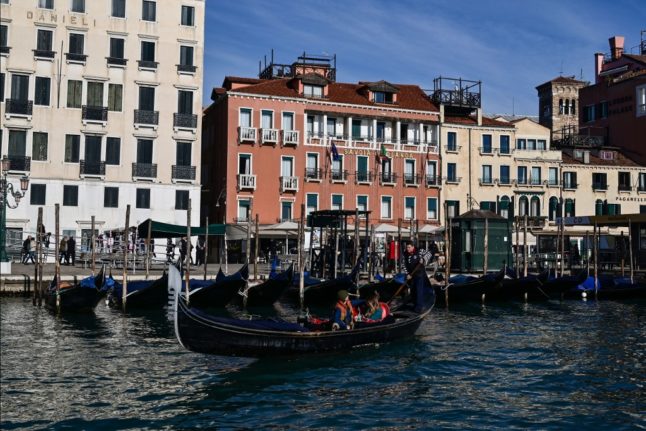