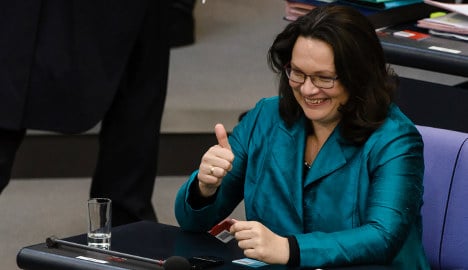 Speaking at a youth employment conference in Rome and quoted by the news agency Ansa, Nahles said: "We have respect and admiration for the commitment to reform" of the administration of Prime Minister Matteo Renzi.

"It's incredible to see how many efforts have already been made," she added.

Italy has faced much criticizm from Germany over its mountainous debt. Two days after Italy took up the EU’s rotating presidency, German MEP Manfred Weber accused the country, along with France, of not wanting to comply with the budget requirements that Greece and Portugal had to endure.

Mario Draghi, the president of the European Central Bank, also came down hard on his home country in early August, blaming its economic hardship on bureaucracy, low private investment and a lack of structural reforms.

As Nahles commended Italy, premier Renzi was criticized at home on Monday over his labour reforms, or the so-called Jobs Act.

He was accused of trying to create “a Germany model”, which would give less protection to workers.