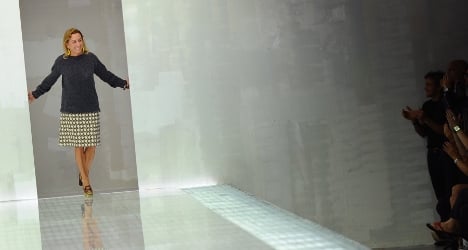 Miuccia Prada and her husband Patrizio Bertelli are being probed over tax evasion. Photo: Christophe Simon/AFP

Instead, the company referred reporters to a terse statement it made to the Hong Kong stock exchange confirming that the private tax returns of company supremo Miuccia Prada and her husband Patrizio Bertelli are subject to a criminal investigation "regarding the accuracy of certain past tax filings by them as individuals in respect of foreign owned companies".

Italian news reports say the two appeared to have failed to declare €470 million in foreign revenues.

Asked by AFP for further explanation, Prada declined to identify the companies concerned while stressing that the issue was a private one which did not involve the company or any of its subsidiaries.

Italy's national news agency, Ansa, said Prada's statement had been triggered by a Milan prosecutor's request to extend by six months an investigation that began as a result of a deal that the company did with the Italian tax authorities at the end of last year as part of moves to return its headquarters and tax residence to its home country.

Under that deal, Miuccia Prada and Bertelli were reported to have made voluntary disclosure of past under-reporting of income and reached agreement with the tax authorities on a settlement figure of €400 million.

Prada declined to clarify the issue.

News of the probe, which Prada insisted it had "just been informed" of, knocked the company's shares in Hong Kong, although they actually outperformed a broader market in freefall over unrest in the former British colony.

Prada is the latest in a series of Italian fashion houses to be targeted over its tax affairs as the government seeks to improve the country's stricken public finances against a backdrop of an economy that is, at best, stagnating.

Last year the design duo Dolce and Gabbana were convicted of avoiding taxes through their own overseas holding company arrangement – charges they deny and which are subject to further appeal having been upheld once by the courts.

The Marzotto textile group and upmarket jeweller Bulgari, both private businesses, have also been targeted by tax probes in recent years.

After years of stellar growth, Prada has been hit hard this year by a downturn in demand for its expensive products with profit sliding 20 percent in the first half.