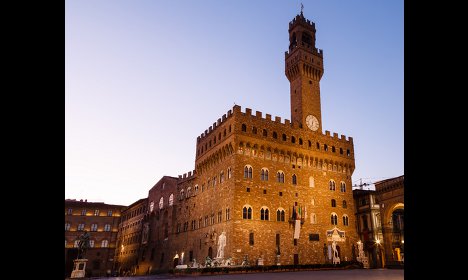 The couple was photographed having sex up against the window of fashion house Chanel, in Via Calimaruzza, just off Piazza della Signoria. Chanel staff were unavailable for comment when contacted by The Local.

The square is famed for housing the 13th-century Palazzo Vecchio, now city hall, and the Loggia dei Lanzi which holds some of the city’s most celebrated statues. The alleyway where the couple was snapped is a short walk away from tourist hotspots the Ponte Vecchio and the cathedral.

The people caught in the act are believed to be Americans and were photographed together at dawn, Firenze Today reported.

Francesca Padula, a city hall spokeswoman, was unable to confirm the nationality of the amorous duo.

She remarked, however, that this is not the first such incident; in 2012 a couple was caught having sex in Piazza Santa Croce, “considered part of the historical centre.”

“[But] it’s not only Florence, this happens in other European cities,” Padula told The Local.

Firenze Today said the episode has turned the historical centre into a veritable “red light district”, with an act of “eroticisim” which speaks of a city in decline.

In 2013 a drunk couple was caught in the act in Florence’s historical centre, the news site said, while just last week an Italian was last week stopped by police after peeing on the square’s famous church. In February, an American also mistook the square for a public toilet, choosing to wee in the taxi rank.