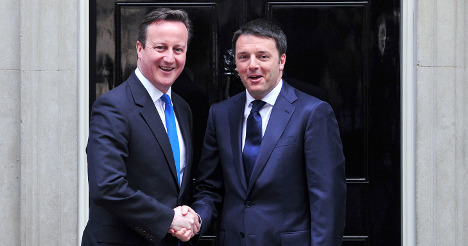 Speaking during a press conference in London, Renzi said: “If France has decided to do this, then it has its reasons. I support Hollande.”

The French government said on Wednesday that next year’s budget would include large spending cuts to help get its finances in order but that that EU-agreed budget deficit limit, set at three percent of economic output, was unlikely to be met until 2017.

Renzi said that while Italy would respect the budget limit, Germany should respect countries like France who decide to flout it and not lecture them like teachers.

“Nobody has the right to treat other countries like school children,” he said.

Renzi retirated his message in an interview with CNN, saying that "France with Hollande and a 4.4 percent deficit is better than a France with Marine Le Pen", the leader of the far-right National Front who gained seats in the French upper house of parliament for the first time last week.

He added that the three percent limit “is a thing of the past”, which Italy has previously“lost credibility”for flouting.

Renzi also met British Prime Minister David Cameron during his visit, and complimented him on the outcome of the Scottish referendum.