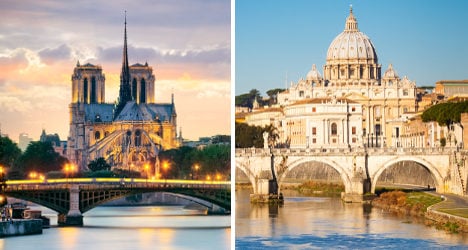 What could Paris and Rome learn from each other? Photo: Shutterstock

Paris Mayor Anne Hidalgo’s visit to Rome was aimed at reaffirming the special connection between the two historic cities.

Rome is the only city in the world Paris is twinned with and Hidalgo and her Italian counterpart Ignazio Marino wanted to strengthen the special link that was first forged back in 1956.

They discussed ways of boosting cooperation on topics such as the climate, energy use and cultural development. But The Local Italy Editor Angela Giuffrida, who has had the advantage of having lived in the two cities, has laid out a few ways the two capitals and their inhabitants could really learn from each other.

Five things the Romans could teach the Parisians:

1) Smile and be happy

Italy's economy is in far worse shape than France's but you don't see the Romans looking down in the dumps like the locals in Paris. Whatever their troubles they generally put on a cheerful front, which makes you feel cheerful too.

Of course, there are exceptions, but Rome is the kind of place where, as a foreigner, you never really feel lonely due to the pleasant interactions you experience each day.

2) Don't knock a foreigner's attempt to speak your language

Regardless of how bad your Italian skills are, the Romans, unlike the Parisians, will never make you feel bad about it.

You might only say, "Ciao!" and a Roman will have you believe you're fluent by replying: "Ma parli bene in Italiano!" (You speak Italian well!)

They're obviously lying but who cares. It gives you the confidence to keep trying. It would be great if Parisians could be a bit more like that.

3) Don’t let your dogs pop in the street

Rome might be disorganized and the transport system a mess but at least the city's dogs, and their owners, seem to respect the beautiful, cobbled streets that the Emperors once trudged down.

4) How to make pizza

The French might be the second biggest consumers of pizza in the world after the US, but they still can’t make a decent one. Paris’s pizza chefs should take a few tips from their counterparts in Rome.

Women drinking beer is not seen as uncouth or unsophisticated in Rome. In fact, it adds to their effortless elegance.

And five things the Parisians could teach the Romans:

Paris has one of the best transport systems in the world, and it’s cheap. Plus, along with the art nouveau entrances, many of the metro stations have their own special character, such as Arts et Metiers, which resembles the inside of a submarine, while there are replicas of artworks in the Louvre on display at Louvre-Rivoli.

Rome’s metro, despite the 80s music playing at some stations, doesn't really cut it. Paris also has the edge over Rome when it comes to cycling paths and Velib' system.

When sitting down to dine at a restaurant in Paris, the first thing the waiter does is put a basket of bread and bottle of water on the table.In Rome they give you a basket of plastic-wrapped bread sticks which you have to pay for, most of the time. And then there’s the “copertis” – the cover charge levied by restaurants just for sitting down in their restaurant.

3) How to do better night life

Rome has some great restaurants and wine bars, but when it comes to clubs and other kinds of night life, it's pretty rubbish. So Paris, with its late-night clubs and lively bars, many with live music, could show Rome how to liven up a little.

4) How to do international restaurants

The French are as precious about their national cuisine as the Italians, but they still have a taste for foreign food. If you fancy going for an Italian then Rome can cater for you, but foreign restaurants are hard to find. Paris, on the other hand, has lively quarters dedicated to gastronomy from all over the world.  Just check out some of the Thai and Vietnamese eateries around Belleville. 5) How to do modern architecture

Modern architecture doesn’t need to be a blight on an ancient horizon.Paris has managed to mix the old with the new quite nicely with Grand Arc de La Defense – a 20th century, much bigger version of the Arc de Triomphe.

Then there’s the famous glass pyramid at The Louvre, which houses some of Italy’s most famous artwork. On that note, maybe the Parisians also could teach the Romans how to keep their prized works of art at home?

Would you add anything to this list? Let us know in the comments section below.