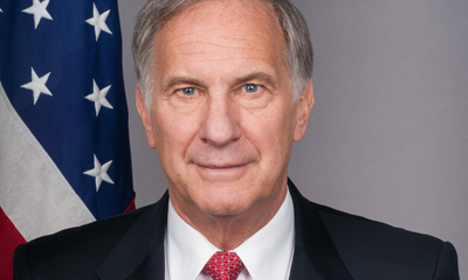 John R Phillips has been the US ambassador to Italy for a year. Photo: US Embassy Rome

Reflecting on his first year as the US ambassador in Rome, Phillips said seeing Renzi in action reminded him of Reagan during his presidency in the 1980s.

“I think that Renzi is able to speak directly to the people and about their frustrations. In some ways it’s like Ronald Reagan was in the US.

“Reagan spoke in an understandable way. He really knew how to respond to what the people asked,” Phillips told La Repubblica.

The ambassador expressed his support for the Italian prime minister’s “urgent” reforms, although warned challenges remained.

“The real problem will be whether this political system is able to take these transformations on board or if instead it’s too rigid, too divided between interest groups,” he said.

With youth unemployment at 44.2 percent, Phillips also warned that Italy was “losing a generation” and must revamp its labour system in order to attract foreign investment.

“I speak to American business owners who want to invest in Italy, and one of the questions they raise immediately is the rigidity and management of labour,” he said. Beyond this, the ambassador ranked Italy’s slow justice system as “the biggest deterrent” for investors.

Phillips also touched upon Italy’s foreign policy, commenting on Rome’s involvement in the US-led fight against jihadist group the Islamic State in Iraq and Syria (Isis).

“Italy was one of the first countries to go ahead and support this international initiative. Italy offered humanitarian aid, giving a hand in every way.

“The only thing that it hasn’t done is take part in the aerial raids with its air force, but let’s see in the future,” he said.