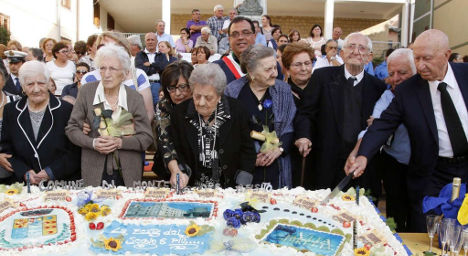 Some of the nine centenarians of Montemaggiore Belsito. Photo: Antonio Parinello

A special celebration, entitled 'A century and more', was held in the town of just 3,500 on Thursday in honour of the community’s nine eldest, whose ages range from 100 to 102, LaSicilia.it reported.

“It was an honour for the council, and for the entire community, to celebrate with our nine centenarians,” Mariangela Traina, the town’s deputy mayor, was quoted as saying.

“Their experience and wisdom has been passed onto their children, their grandchildren and the whole town.”

Although the town’s natural environment has long been credited for people living long lives, Traina said the real recipe for a long life is to “love and defend one’s own history and identity”.

“These are tough times,” she added.

“But our history, culture and beautiful surroundings…could be a driving force for the economic development of our town and a better tomorrow.”

The eldest of the nine is Filippa Lentini,102, followed by Rosario Gullo and Rosina Siragusa, both 101, and then Paolina Catalano, Agata Geraci, Vincenzo Impellitteri, Santa Rizzo, Giuseppe Militello and Mercurio Fiorella, who are all 100.

Italians are blessed with longetivity, especially those living in Sardinia, which has the world’s highest recorded percentage of people who have eclipsed a century.

The oldest living person in Europe is also from Italy.

Emma Morano, from Verbania in the northern Italian region of Piedmont, will turn 115 in late November. She attributes her long life to “eggs and sleep.”

READ MORE HERE: 'Italian hits 114 thanks to 'eggs and sleep'

But despite the population enjoying longevity, Italy's not a good place to be old, according to a study published earlier this week.