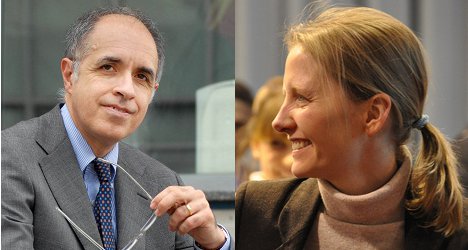 With just a few words, a suited student sums up the mindset of the Polytechnic University of Milan: “You don’t look into the future if you don’t learn English.”

Andrea Gianfreda, from Lecce in Italy’s far south, is part way through his data engineering masters at the university. Along with his peers, he is studying in English.

While such a linguistic revelation may seem commonplace in northern Europe, Milan’s Polytechnic has faced an upward struggle – and a court case – to get English into its lecture theatres.

Rector Giovanni Azzone describes the change as “a long process”, which is somewhat of an understatement. The university first started teaching in English in 2003, eight years before it decided all masters courses should be taught in English.

The latter announcement sparked fierce opposition, leading to a court case and ultimately a compromise in which some non-compulsory courses can be taught in Italian.

Azzone says a minority of critics took an ideological position – “people who come to our country must learn our language and culture” – while most were simply worried about their level of English.

One academic to get over the initial fear is Michela Arnaboldi, a professor in the university’s department of management, economics and industrial engineering.

“I was scared but very enthusiastic,” she says. Arnaboldi began teaching in English in 2008, having been offered intensive language classes by the university.

The switch went beyond linguistics, she says, as teaching in English has given her classes more of an international flair.

“Even teachers who are opposed will understand the benefit when they start teaching in English, such as the possibility to interact with other cultures. It’s great; you open your mind,” Arnaboldi says.

“At the beginning it was a bit difficult, because of the different way of approaching the lecture.

“We were used to studying with a pen and paper. International lecturers are more about comparison, communication and interaction,” she says.

Although studying a different course, Gianfreda also noticed the alternative approach that comes with studying in another language: “Learning in English doesn’t provide you only with the technical skills to talk in English. It gives you the knowledge to see other points of view.”

Azzone now sees this international element as an imperative part of tertiary education.

Such an attitude is having a notable impact on the university’s global reputation. The polytechnic was this month ranked 86th for engineering and technology in the Times Higher Education World University Rankings, the only Italian university to be featured in the top 100 for the subject.

As a result, foreign students are increasingly choosing to relocate to Milan, Arnaboldi says: “In the beginning we had very few foreign students. Now we have a bigger population and I think it’s better for everyone.”

Federica Antonelli, a recent graduate in management engineering, says through studying in English she was able to take part in international projects and work in multinational teams.

“Most foreign students are from outside of Europe,” she says. “I think it’s important to have this on our CV. To have this kind of experience is an added value in Italy and abroad.”

Soaring youth unemployment, which hit 44.2 percent in August, has seen young Italians fervently learn English in a bid to seek opportunities abroad. But it can also help beat the competition at home, with Antonelli describing English as a “requirement” in the business world.

The university currently boasts a 90 percent employment rate, a year after students graduate, with just a sixth of graduates taking positions outside of Italy.

For Gianfreda, a proven knowledge of English is essential to having a successful career in computer science. “All the research and documents are in English, so if you want to be up-to-date you have to read in English,” he says.

Over the past decade, Azzone has seen a positive trend in young Italians’ growing willingness and ability to study in English.

“People arriving at the university now have better skills than ten years ago. Maybe it’s because of an improvement of the quality of the high schools, or that they have the web,” he says.

Having won over the university management and the majority of professors, the rector sees Italy’s administration as the biggest hurdle left to jump.

“We are a university that decided to do something difficult, without any financial benefit for professors. In the end we had to fight against the court and [education] minister to do something that is useful for the students,” he says.

While English now reverberates around the university’s lecture theatres, Azzone says it is still a struggle to enrol foreign students, despite the uptick in the number of foreigners at the university, as well as employ professors from abroad.

“The rules for foreign people coming to Italy are designed to protect Italian people. We want these to change to attract bright human capital,” he says.

The rector is not optimistic about the alternative: “Either we are able to adapt the rules or it could be very difficult to continue to compete. Either we are flexible, innovative, creative, or the risk is that we go into decline.”

Some suggest that the next step should be to encourage students to pick up yet another language, to reflect the growing importance of rising global powers.

Arnaboldi says if she were to invest in another language, she’d pick Chinese or Russian, ruling out French despite it being widely taught in Italian schools.

Gianfreda argues “we should have one language”, reflecting the global preference for English, while Antonelli says professionally it is more important to have a high standard of English than another language.

Azzone remains confident that in being bilingual, the university has made the right choice. “If I had to bet on the future, I feel that for the next 20 to 30 years English will be the international standard,” he says, fluently.