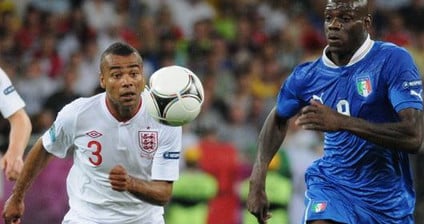 Immobile's positive start to life in the Bundesliga since joining the German side from Torino has coincided with a recall to the national squad in the wake of a disastrous World Cup campaign.

His impressive club form is in stark contrast to that of Balotelli, who is struggling to make an impact at Liverpool since quitting AC Milan and has fallen out of favour with new Italy coach Antonio Conte.

Immobile is expected to start up front alongside Sassuolo striker Simone Zaza when Italy host Azerbaijan at the Stadio Barbera in Palermo.

"There are other strikers here who are playing very well. If they're here, it's because they deserve to be," Immobile told reporters at Italy's Coverciano training camp on Wednesday.

"I know Mario very well. He's a good lad, but it's the coach who picks the squad."

Conte said earlier this week: "Mario has started afresh, so it's not easy. I think we need to give him time to settle at Liverpool.

"I make call-ups, not exclusions. Those are two very different things."

Immobile was part of the Italy squad that failed to get past the first round in Brazil where Cesare Prandelli's side lost to Costa Rica and Uruguay having opened their campaign by beating England.

Defender Leonardo Bonucci complained last week Italy's World Cup preparations suffered because their "team base was a little too holiday-like".

But any thoughts of an easy ride under Conte are likely to have dissipated immediately after his appointment.

Conte previously led Juventus to three consecutive Serie A titles and is known for his no-nonsense disciplinarian approach.

Indeed this steely attitude was in evidence as he said that any bitterness or tension still hanging over the Juventus and Roma players after the Turin side won their bad-tempered Serie A game last weekend 3-2 was to be left for afterwards.

Bonucci had helped to stoke the fires with an inflammatory tweet earlier this week.

"Once you cross the door at Coverciano, all other tensions remain outside," warned Conte.

"Bonucci was wrong, and he knows he is wrong. Here, we all play for the same team. If it happens again, there will be consequences."

One of the benefits to come out of the Juventus and Roma match was the return from injury of veteran playmaker Andrea Pirlo, who seems set to line up on Friday in his usual central midfield role.

Following an opening 2-0 win over Group H rivals Oslo in Norway, where Balotelli was also absent, Italy are looking to make it three wins from three and will be encouraged that they can achieve that as Azerbaijan coach Berti Vogts has lost several key players for the game.

The German will be without defender Mahir Shukurov and forward Vagif Javadov, who both started in the 2-1 defeat to Bulgaria last month.

Striker Cihan Ozkara and injured skipper Rashad Sadygov are also missing, meaning a number of younger players have been brought in.

After the Azerbijan clash Italy fly to Malta for their second match in four days and the clash at the Ta'Qali Stadium is perhaps more of a concern for Conte.

"The important thing is that my boys are improving all the time and are getting there. I am very confident," Ghedin told UEFA.com.