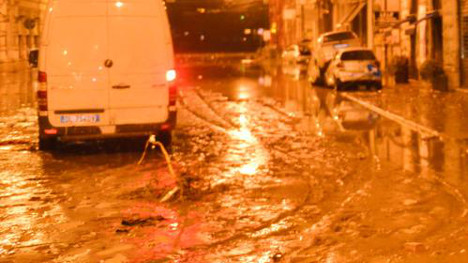 One man died after Genoa was hit with torrential rain. Photo: IlSecoloXIX

The city was hit by torrential rain late on Thursday night, causing the river Bisagno to breaks its banks and killing a 57-year-old man.

Money will be released by the so-called Unblock Italy decree, which aims to free-up billions of euros for infrastructure projects that have been hampered by stifling bureaucracy.

Renzi announced the measure in June, saying it would “free up initiatives blocked for the past 40 years”.

An amendment “will immediately assign funding for urgent works to combat hydrogeological instability,” Chiara Braga, the supervisor of the decree, was quoted in Il Secolo XIX as saying.

The announcement follows an outcry at the government’s failure to build flood safety measures in the city since the last serious flood in 2011, when seven people, including two children, lost their lives.

The €35 million set aside for the works was never spent due to legal wrangling and bureaucracy.

The city remained on high alert on Monday as heavy rain continued, causing trains to be blocked on flooded rail tracks.

Many homes and shops have also been devastated. Strong storms also hit parts of Piemonte,  inland Liguria, and the provinces of Mantua, Verona, Trentino and Brescia on Monday.