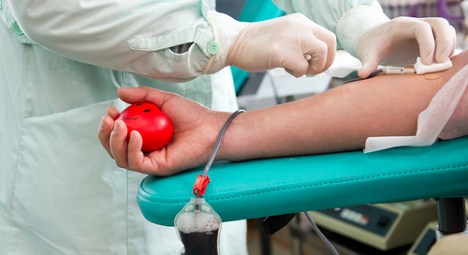 The couple, who are regular donors at the Santa Caterina Novella di Galatina hospital in Salento, were allegedly turned away from the clinic on Saturday on the grounds that gay people could not donate blood.

Italy lifted a lifetime ban on gay people donating blood in 2001, although restrictions apply if you have been in a relationship with a new partner for less than four months.

“A nurse also tried to dissuade us, telling us that in the past our blood had been thrown away,” one of the men was quoted as saying by La Repubblica.

The head of the centre defended staff, saying that they had just been applying the law and had acted without prejudice.

Unsatisfied with the explanation, the couple alerted police and their lawyer.

Realizing their mistake, staff then apologized to the couple.

“It was an inexcusable and gross error that has the features of discrimination expressly forbidden – also by our Constitution,” Valdo Mellone, director general of the Lecce Health Authority said.

“But I imagine that the doctor acted in good faith,” he added.

He also invited the couple to come back to the hospital in three months’ time to donate again.

Mellone said he would also open an inquiry into the blood that was apparently “thrown out”.