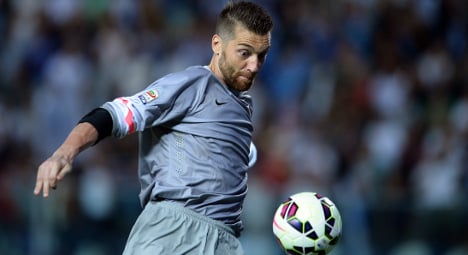 "… homosexuality exists in Italian football. Out of 400-500 players, 2-3 percent are for sure gay, but no one has had the courage to come out because unfortunately ours is a homophobic environment", De Sanctis told Gazzetta dello Sport.

De Sanctis, who hinted he could be in his last year in Italy's top flight before a possible move to the United States, made the comments in a two-page interview Thursday in which he mainly alleged that champions Juventus benefit from favourable refereeing decisions.

De Sanctis isn't the only footballer to speak out publicly about homophobia in the sport.

In January former German international Thomas Hitzlsperger came out as gay saying he had decided to become the first prominent footballer to reveal he was gay to spark a public debate about homosexuality in sport.

“The subject remains stuck in clichés,” he said. “Professional sportsmen appear perfect ‘disciplined’, ‘hard’, ‘manly’. Homosexuals on the other hand are seen as ‘bitchy’, ‘soft’, ‘sensitive’.”

“Homosexuality and masculinity are not contradictory,” he said.

READ MORE: Hitzlsperger: 'Why I decided to come out'

It comes two weeks after Roma suffered a 3-2 defeat in Turin, allowing Juventus to pull three points clear at the top of Serie A.

The 37-year-old 'keeper also said he has witnessed "pharmaceutical abuse".

Asked if he had ever witnessed doping during his 20-year career, the former Juventus, Sevilla (Spain) and Napoli 'keeper said: "Doping no, but pharmaceutical abuse yes."