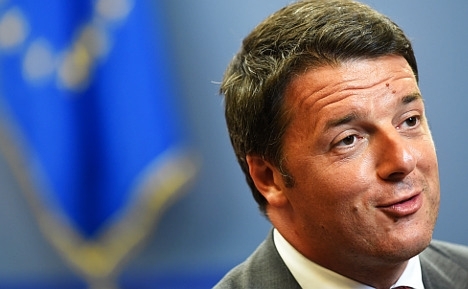 The tax cut is "the biggest ever done in the history of the Italian Republic", Prime Minister Matteo Renzi told a press conference after a race to nail down budget plans which will be scrutinised by the European Commission before going before parliament.

"This is a great, great, great change. It's a budget which aims to expand and be counter-cyclical in a moment of difficulty," he said.

At the heart of the programme is €18 billion ($23 billion) worth of tax cuts for businesses and lower-income individuals which Renzi said had been a no-brainer because taxes "had reached a crazy level."

The young PM, who has staked his reputation on overhauling Italy's sluggish economy, said the budget also includes spending cuts of €15 billion and €11 billion euros of extra borrowing – a detail which may rankle the Commission.

Renzi has been walking a tightrope between defending neighbouring powerhouse France – which is defying Brussels over cutting its deficit — and trying to keep in the good graces of the Commission.

He said Italy would "respect the EU's 3.0 percent ceiling", and he was ready to answer to Brussels, which had requested a 0.5 percent deficit reduction.

Playing ball on the EU's rule of not having an annual deficit of more than 3.0 percent of GDP is less about kowtowing to Brussels than placating the markets and avoiding paying more to finance its vast public debt, which stood at €2.14 trillion in August according to the Bank of Italy.

"We are respecting the rules as the EU has explained them. If there are any specific questions, however, we will answer them," Renzi said, adding that Italy's exceptional economic circumstances should be noted.

Some €3.8 billion is expected to come from the fight against tax evasion, which the 39-year-old described as "a gigantic battle."

Another €5.0 billion has been set aside to reduce an unpopular regional labour tax (IRAP), while €1.9 billion will go towards tax breaks for companies hiring new staff on full-time, long-term contracts.

"Dear employer, will you now hire someone on a long-term contract? Mamma mia! What more do you want? I've got rid of every alibi," Renzi said.

Economy Minister Pier Carlo Padoan told the press conference that Italy expected the economy to return to growth in the medium term, though "the impact of the reforms undertaken now will be stronger in 2016 than today."

Italy discovered on earlier Wednesday that it had escaped its third recession in six years after new EU data collation methods — which include illegal economic activities such as prostitution and drugs — revised up its GDP figure for the first quarter.

But a slump in the second quarter looked set to continue in the third, which would inevitably plunge the eurozone's third-largest economy back into the mire.

The government has forecast a debt to GDP ratio of 133.4 percent in 2015 – more than twice the EU ceiling of 60 percent.

Renzi insisted economic watchers' fears over the country's financial health were unfounded, saying: "This budget is a sign of Italy's great strength, of its pragmatism and stability, and cannot be seen as problematic for the markets."

Ahead of the cabinet meeting, European Commission economic policy spokesman Simon O'Connor tried to stamp down fears that Italy will be chastised, tweeting in Italian that "we are waiting to see the budget before commenting."

Renzi has presented a let-up in austerity as an effort to boost growth.

"Everybody, apart from certain people in Europe, understands that the important thing is growth," he said in a meeting late on Tuesday with his Chinese counterpart Li Keqiang, in a fresh jab at austerity hawks.

To Renzi's relief, the business sector has already hailed the budget, with the head of the Confindustria lobby Giorgio Squinzi expressing his "full satisfaction" and saying "the direction taken is one we hoped for for years."

And his government received a welcome boost from ratings agency Moody's on Tuesday, which praised its "accelerated reform efforts", saying they would "mitigate the impact of the economy's return to recession on Italy's creditworthiness."

But not everyone is happy, with the leader of Italy's biggest trade union CGIL, Susanna Camusso, warning the "mix of spending cuts and tax reductions for some will keep the country in a state of recession."