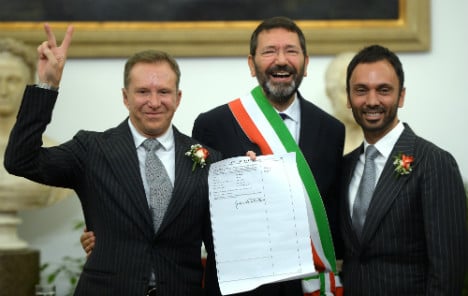 Rome's mayor, Ignazio Marino (C), poses with a gay couple after he registers their marriage on October 18, 2014 at the city hall reception room in Rome. AFP Photo/Filippo Monteforte

The ceremony, involving gay men and women, took place in Rome's town hall on the Capitoline Hill as Catholic bishops from all over the world met at the Vatican on the other side of the river Tiber for a synod on the family, which is discussing whether the Church should open up to homosexuals.

The couples, accompanied by their families and sometimes their children, walked up one after the other to have their unions registered by Marino.

The prefecture of Rome later annulled the registrations, which are illegal under Italian law, which does not recognise gay marriage.

Italy's centre-right Interior Minister Angelino Alfano said on Facebook that "we must remember that this is not possible under Italian law".

The diocese of Rome criticised the mayor for his "ideological choice" and "the institutional affront" of registering the couples when he knew it was against the law, in its Roma Sette weekly review.

A heated debate is raging within the Church over the place of gays, who have long been condemned by the hierarchy. Even the most progressive of the 200 bishops meeting at the synod in Rome, however, have not raised the possibility of gay marriage.

Catholic doctrine dictates that marriage is between a man and a woman.