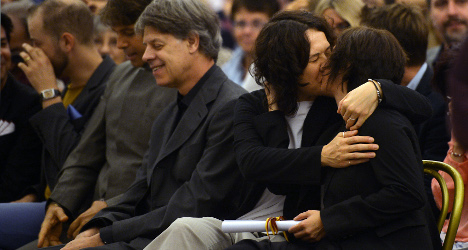 The move to allow gay couples more legal rights will be debated in the Senate by the end of the year, or January at the latest, the centre-left premier said.

“The timing? Immediately after the electoral reform,” he said on the Domenica Live TV programme, referring to the long-awaited revamp of Italian elections.

Renzi said the proposal for same-sex unions will be based on the German model, which allows for civil partnerships but stops short of granting gay couples marriage rights.

“The German law is a good reference point and allows people of the same sex to be given civil rights,” he said.

The prime minister spoke out a day after Rome Mayor Ignazio Marino sparked anger among conservatives for adding citizens’ foreign gay nuptials to the civil register.

Along with a number of other Italian mayors, including those from Bologna and Naples, Marino has been welcoming gay couples to city hall to recognize their nuptials from countries where same-sex marriage is legal.

The registrations on Saturday were however swiftly annulled by the prefecture of Rome, as gay marriage is illegal in Italy.

The mayors’ rebellion has been met with strong opposition by Angelino Alfano, Italy’s centre-right interior minister, who vowed last week to put a stop to the registrations.