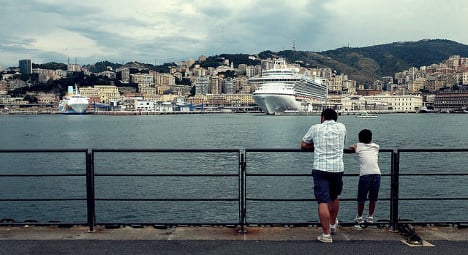 Ferries arriving in Genoa. The city is the first point of entry for many Moroccan citizens to Italy. Photo: Carlo Mirante/Flickr

Of the EU’s 28 member countries, Italy issued the third-highest number of foreigners' first resident permits, a total of 243,954, a Eurostat report revealed on Wednesday.

The largest group of non-EU citizens to be issued resident permits in Italy were Moroccan citizens, with a total of 25,165, followed by the Chinese with 19,967 and Albanians with 15,890.

A total of 2.36 million first-time residence permits were issued overall in the EU in 2013, with the majority of beneficiaries being from Ukraine, followed by India and the US.

This decrease is mainly due to the fall in the number of first permits issued for employment reasons (from 0.8 million in 2008 to 0.5 million in 2013), Eurostat said.

The new figures come as Italian Prime Minister Matteo Renzi promises to make it easier for children born to foreigners in Italy to get citizenship.

On Tuesday Education Minister Stefania Giannini announced that Italian language lessons will be introduced for immigrant children in schools, in a “fundamental” move to promote integration.