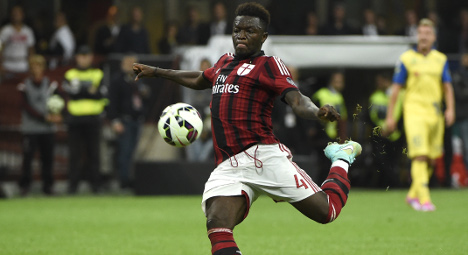 The Serie A club will now play their next home game, against Lazio on October 30th, devoid of fans in their south stand. The club has also been handed a €50,000 ($64,000 fine), Serie A league officials announced Tuesday.

Milan beat Verona 3-1 away last weekend, a result which left the Rossoneri in fourth place in the league table five points behind leader Juventus.

However league officials said in a statement Muntari was targeted by "around 3000 fans who shouted uh, uh, uh noises" every time he touched the ball. The behaviour amounted to "clear racial discrimination".

Inter fans were heard shouting insults against Napoli, the city and its people during last Sunday's 2-2 draw at the San Siro.

Racism has been endemic in Italian football for many years and clubs are regularly punished because some fans hurl abuse at black or non-Italian players.

Last season, AC Milan pair Mario Balotelli and Kevin Prince Boateng were both subject to racist abuse. Boateng quit the club for Germany's Bundesliga in the early stages of the 2013/14 season while Balotelli is now at Liverpool.

Italian football federation (FIGC) president Carlo Tavecchio was recently banned for six months by UEFA for remarks he made prior to his election that were deemed of a racist nature.

At a summer assembly of amateur leagues, Tavecchio was comparing how Italy and England deal separately with the influx of foreign players.

"Here, we get Opti Poba, who previously ate bananas and then suddenly becomes a first-team player with Lazio," said Tavecchio, although there is no player of that name playing for Lazio.

Despite the slur, Tavecchio was elected FIGC president with more than 66 percent in the third round of voting.