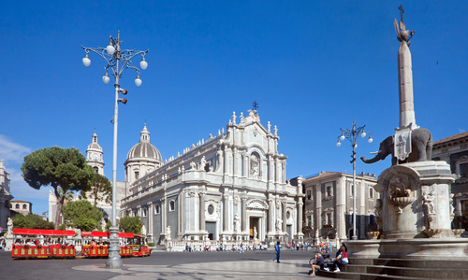 The accident happened in the centre of Catania, eastern Sicily. Catania photo: Shutterstock

Patrizia Scalora was killed by the palm tree in Piazza Cutelli in the heart of the Sicilian city, Corriere del Mezzogiorno reported.

The 49-year-old had been sitting on a bench with her daughter, 19, when the accident happened. Emergency services were called but were paramedics were unable to save her.

High winds are thought to have caused the top of the palm tree, which was more than five metres high, to fall down.

There has, however, been speculation that the tree may have been infected by Red Palm Weevil (RPW), a pest which attacks palm trees, despite showing no signs of the infection when recently trimmed by city authorities.

Local prosecutors have ordered the tree to be tested, Corriere said.

Mayor Enzo Bianco launched a separate investigation and called for all palm trees in the Catania area to undergo checks.

As high winds hit Sicily, bad weather has also been reported in Sardinia where six-metre waves have been lapping the island’s shore.

Rain is forecast in the central and southern regions of Italy on Friday, while temperatures are expected to fall. Snow is also forecast for some parts of the country, La Repubblica reported.