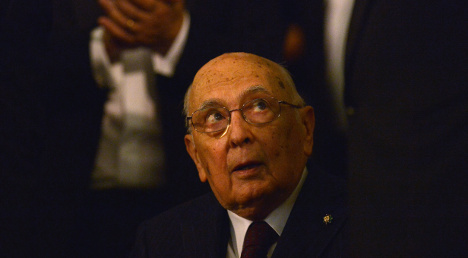 The 89-year-old head of state, who is not accused of playing a role in the deal, will be taking the stand as prosecutors attempt to unearth fresh evidence on mob bombings two decades ago which killed 21 people including top anti-mafia judges.

High-ranking ministers are suspected of having negotiated with the Sicilian mafia to end the violence which shook Florence, Milan and Rome in exchange for softer jail sentences and better conditions in prison for convicted mobsters.

The trial is being held in Palermo but moved to Rome to hear Napolitano's testimony, to be given behind closed doors. Details of Napolitano's statements were not expected to be available immediately.

The man prosecutors suspect cemented the deal – Mafia chief Toto "The Beast" Riina – had applied to join in the hearing via video link from his prison cell, but his request was denied by the court, along with that of fellow gangster Leoluca Bagarella.

At the time of the bombings Napolitano was president of the lower house of parliament. Prosecutors were expected to ask him some twenty questions about conversations one of the suspects had with one of Napolitano's former advisors.

The head of state was called as a witness after phone taps revealed former interior minister Nicola Mancino had made four calls to Napolitano in which he purportedly complained about the prosecutors and asked the president to help him out.

The prosecution believes Mancino, who denies wrongdoing in the case, may have told Napolitano details of conversations he had with former presidential legal advisor Loris D'Ambrosio.

Seven judges and the president of the court of Palermo were at the 16th-century presidential palace for the hearing, which will be held in the "dark room", so-called because it has no windows onto the outside world.

Riina, famed for being one of the bloodiest mafia bosses in history, is one of six mob-connected figures prosecutors have in their sights. He threatened to kill prosecuting magistrate Nino Di Matteo over the trial last year, according to Italian media reports.

The case is likely to drag on for years. The trial is not expected to reach a verdict before the end of 2015 and under the Italian legal system it can then be appealed twice before the verdict becomes conclusive.