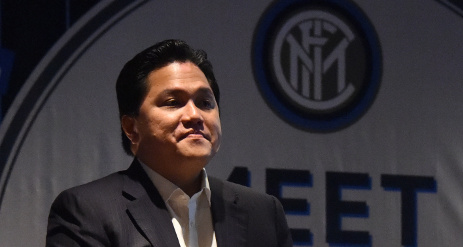 Moratti recently gave up his post as honorary president, prompting an outpouring of tributes for his contribution during 18 memorable years at the club.

Simultaneously, Thohir, the first Asian to effectively own an Italian club, has faced scrutiny after a little less than a year at the helm.

The president of Serie A highflyers Sampdoria, Massimo Ferrero, was forced to issue an apology to Thohir last week after hitting out: "It's not right that Moratti was treated like this. I am very sad for him. I told him: kick out that Filipino…."

Evelina Christillin, the former president of the organising committee for the 2006 Torino Olympics, appeared to provoke Thohir in a column for the Huffington Post earlier this week which questioned the Indonesian's true financial power.

"What is there left at Inter without Moratti?" Christillin wrote in her blog, reproduced in several media reports throughout Italy including Wednesday's La Gazzetta dello Sport.

"A fat little Indonesian who, at the end of the day, has taken over from Moratti and has the majority of the shares but no one knows if he has the financial clout or not."

The blog appeared to take on an overtly offensive tone when she referred to Thohir as a 'cicciobello a mandorla' – which loosely translates as a 'slant-eyed baby doll'.

'Ciccio', in Italian, means chubby or plump. A 'cicciobello' is an Italian make of doll while 'occhi a mandorla' (almond-shaped eyes) is a widely-used term to describe someone of Asian appearance, although it can have racist undertones.

She added: "The slant-eyed baby doll can do what he wants, he (Moratti) is no longer there."

Italian society in general has often been accused of being inherently racist.

In 2008, comments by then president of Italy Silvio Berlusconi hit the headlines worldwide when he called the president of the United States, Barack Obama, "young, handsome and tanned."

Several black footballers who played in Italy's top flight, including Mario Balotelli and Kevin Prince Boateng, have been subjected to overtly racist insults in recent seasons.

Film producer Ferrero, who took over Genoa-based club Sampdoria at the end  of last season, made his gaffe Sunday in an interview with Rai Sport after being asked about Moratti's recent decision to resign as honorary president.

Sampdoria later released a statement which cited Ferrero as saying: "I would like to sincerely underline I did not mean any disrespect to Thohir, the directors of Inter or the people of the Philippines, who I have always had a great relationship with.

"I was trying to praise Moratti and all he has contributed to Inter and Italian football for 20 years."