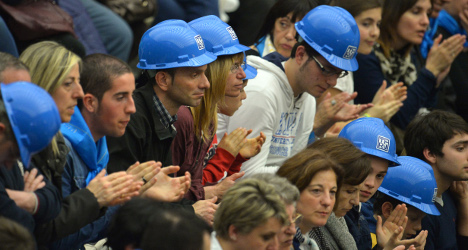 Several hundred people were protesting in front of the German embassy in Rome against cuts expected to hit over 530 employees at the Terni steel works, owned by German group ThyssenKrupp, when clashes broke out. Up to five demonstrators were lightly hurt, according to Italian media reports.

"The government should give answers not bludgeon workers," said Susanna Camusso, head of the CGIL, Italy's largest trade union.

"Half the country is going from bad to worse and if people protest they are charged at by the police," she said, adding that she would visit those hurt in hospital.

Her comments came after days of increasingly heated spats between the unions and the government over Renzi's plans to overhaul the job sector – in particular by make it easier for companies to fire workers.

The job market is a particularly sore topic in the eurozone's third largest economy, which is struggling to stave off its third recession in six years.

Youth unemployment stands at a record 44.2 percent and those who do manage to find work are often hired on temporary contracts which offer little in the way of security or benefits.

Renzi's measures were given the green light by the upper house of parliament after the prime minister turned the vote into a confidence vote on the government.

But they still need to be adopted by the lower house and a protest in Rome on Saturday to block the most controversial aspects of the reforms drew one million Italians from across the country, according to the organizers.

In a rare attack on a centre-left government – which is historically an ally of the unions – Camusso took to a podium in front of thousands in the Italian capital to denounce the plans and announce a general strike.

The 39-year-old premier hit back, saying "the era when a protest can block the government and the country is over."

And on Monday he launched another attack, saying it was "incredible that Camusso says we must negotiate. Yes, the unions must negotiate, but with businesses. Unions do not negotiate with the government, which has no obligation to ask for permission."

"Laws are not written by unions, but by parliament. If trade unionists want to negotiate, they should get themselves elected," Renzi said.

Watch a video of the protest: