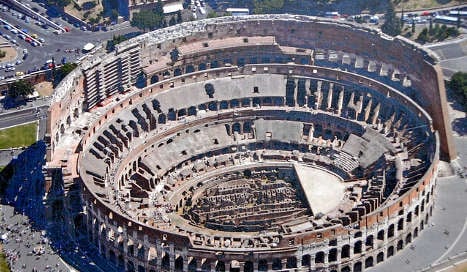 Archaeologists have proposed giving the Colosseum back its arena. Photo: Dennis Jarvis

The Roman amphitheatre, which was completed in 80 AD, once had a wooden floor covered with sand which masked a series of tunnels once used to bring fighters into the arena – but it was removed by excavators in the late 19th century.

In July, archaeologist Daniele Manacorda proposed that a floor should be put back in, an idea enthusiastically taken up by cultural minister Dario Franceschini on Sunday.

"I really like archaeologist Manacorda's idea to give the Colosseum back its area. All that's needed is a bit of courage," he said on Twitter.

The idea is that the area would be used to house cultural events, concerts – and perhaps even reenactments of spectacular shows from the Roman era.

The area below the arena, where once a complex series of elevators and pulleys raised and lowered scenery and props, as well as lifting caged animals like elephants to the surface, could be turned into a museum.

"It is possible. There would not be any big problems, though the research would need to be extensive because complex questions need to be resolved," Adriano La Regina, Rome's former archaeological superintendent, was quoted as saying by Italian media on Monday.

"The Colosseum is not as delicate a monument as it might seem, it was built as a stadium able to accommodate tens of thousands of people," he said.

But others were not convinced, with Salvatore Settis, a professor of classical archaeology and former head of Italy's cultural heritage council, saying Italy was suffering from an extended slump in its economy which left little space for investment in projects of the sort.

"We are living a dramatic moment for cultural patrimony. In this situation, I do not think that giving the Colosseum back its floor is a priority," he said.

The Colosseum is the biggest amphitheatre built during the Roman Empire. It is 48.5 metres (159 foot) high and welcomes over six million visitors a year.

Long-delayed repairs to the 2,000-year-old monument, funded by Italian billionaire Diego Della Valle, began last September and are expected to be finished in 2016.