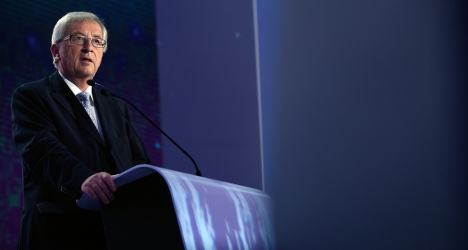 Jean-Claude Juncker said he's "not the leader of a gang of bureaucrats” . Photo: John Thys/AFP

“I’m the president of the EC, an institution that merits respect,,” Juncker said when asked about his thoughts on Renzi calling the EC "technocrats" amid a row over Italy's budget.

"If the Commission had listened to bureaucrats, then the Italian budget would have been treated very differently," he was quoted in Corriere as saying during a European Parliament meeting on Tuesday.

Renzi made his comments on the sidelines of a European Council summit at the end of October, after Italy and four other EU states, including Britain, discovered they had to pay EU bills on December 1st, with Italy's share amounting to €341 million.

Supported by British Prime Minister David Cameron, Renzi said the demand was "a lethal weapon" that would lead voters to see the EC as "technocrats and bureaucrats without a heart or a soul".

Renzi also vowed at the summit to make public the cost of European Union "palaces" in a row over Italy's budget projections, earning a sharp rebuke from then-Commission president Jose Manuel Barroso.

"I don't like the way that certain prime ministers behaved after the summit," Juncker added.