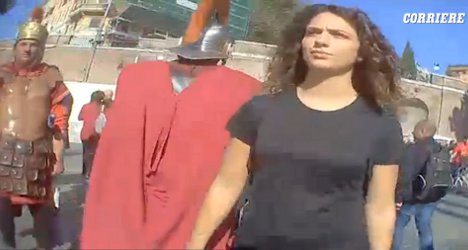 Dressed in black trousers and t-shirt, she is filmed being repeatedly harassed by men.

“At least a smile!” one man says, while others throw questions at her:

Some men appear so stunned to see Brancatisano walk past they are lost for words, instead vocalizing their feelings with “Eeehy!” or “Uh!”

Throughout the day she experienced over 100 incidents of harassment, in areas including Rome’s historical centre.

Brancatisano’s video follows the same experiment being carried out by 24-year-old Shoshana Roberts in New York, where the experience was strikingly similar.

The US video has been supported by Hollaback! – an organization which aims to end street harassment by encouraging victims to capture incidents on their mobile phones.