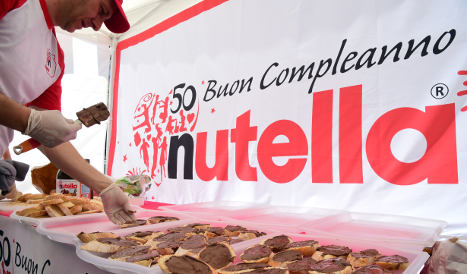 The Nutella brand marked its 50th anniversary in May this year. Photo: Giuseppe Cacace/AFP

With a net worth of $23.4 billion, 89-year-old Ferrero was ranked the world’s 30th richest person out of 200 in the Bloomberg Index.

Leonardo del Vecchio, the founder of the eyeware company Luxottica, came 43rd with a net worth of $17.3 billion, while Ernesto Bertarelli, the heir to the Serono pharmaceutical company, is the world’s 61st richest person with $15 billion.

Ferrero, the son of a smalltime pastry maker, started from humble beginnings and used hazelnut in the Nutella spread to save money on chocolate amid rationing during World War Two.

The brand celebrated its 50th anniversary earlier this year.

Ferrero International, which is also behind the Kinder and Ferrero Rocher brands, is the world’s fourth-largest chocolate maker.

The company is based in Alba and operates 18 production plants globally, selling its chocolate products in over 100 countries.