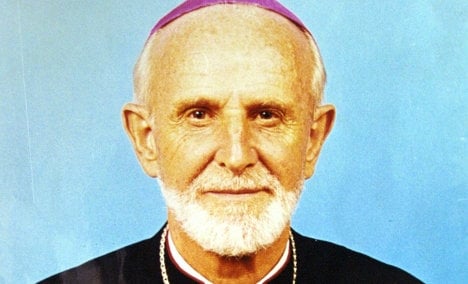 "Catholic priest Guyo Waqo and four others have been sentenced to death for the murder of Isiolo Bishop Luigi Locati," Kenya's Public Prosecutions office said in a statement.

Prosecutors said the five men shot and killed 77-year-old Bishop Luigi Locati in July 2005 after a row over cash donated to the Isiolo diocese in central Kenya.

The popular Locati was slain at the church compound in Isiolo, some 250 kilometres north of the capital, in what prosecutors said was a power struggle for control of the diocese and its cash ahead of the bishop's retirement.

After an eight-year trial, Father Waqo Guyo was named on Tuesday as the mastermind of the plot, having recruited Mohammed Molu Bagajo, Aden Ibrahim Mohamed, Mahati Ali Halake, and Roba Balla Bariche to carry out the killing.

Judge Fred Ochieng ruled the five were "directly involved in the planning and killing of the bishop".

However, it is unlikely the death sentence will be carried out on the men, who all denied the murder and can still appeal the ruling.

Kenya has not carried out executions since 1987, although capital punishment is not formally abolished.

Locati, from the northern Italian province of Vercelli, was ordained a priest in 1952 and came to Kenya ten years later. He set up the Isiolo diocese in 1963.

The murder outraged many Kenyans with hundreds – including then President Mwai Kibaki – attending his funeral in Isiolo.

A sixth man, Diga Wario, was acquitted of the murder.