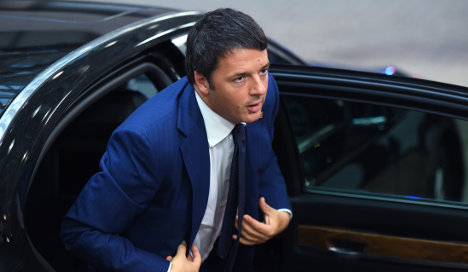 It was the second time this week that eggs were thrown towards the premier as tensions in Italy mount over plans that will make it easier for companies to fire people.

The protesters, carrying signs saying “no unfair dismissal" and “tax the rich, jobs for everyone”, gathered outside the French telecommunications company’s new plant in Monza, where Renzi gave a speech calling for "crucial" investment in technology, both within Italy and the EU, and for the eurozone to break from the shackles of democracy.

The premier was reportedly unscathed by the attack and hustled into the building through a side door, Ansa reported.

The egg attack comes a few days after scuffles broke out between protesters and police on Monday in Brescia, where Renzi gave a speech to local industrialists.

Unions are incensed about Renzi’s so-called Jobs Act, a series of labour reforms which will make it easier for companies to hire, but also fire, people.

The debate centres on the future of Article 18, a law which currently protects those who are unfairly dismissed. The premier argues that Article 18 – drawn up in 1970 – is hampering efforts to get the recession-hit economy back on track.