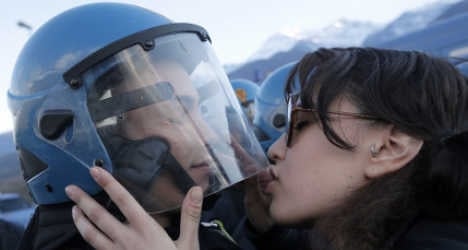 The photo that could lead to a ban on kissing police officers in Italy. Marco Bertorello/AFP

The kissing ban has been mooted as a “provocative act” after a student protester was charged with sexual assault for kissing a riot policeman on his helmet during protests against plans for a new high-speed TAV train in Turin last November, Corriere reported.

Nina De Chiffre, from Milan, was snapped in the act by a photographer from AFP, with the photo then going viral.

She said she “wanted to make fun [of the police]", while Franco Maccari, the Secretary General of Coisp, the Italian police officers' union, said if a police officer kissed a protester then “”World War Three would have broken out”.

Under the proposals, which were put to labour unions on Thursday, police officers must also try to resist “mild physical contact and verbal challenges.”

They will have to keep a minimum distance with protesters during demonstrations in order to avoid physical contact, which should only be a last resort.

Meanwhile, the use of batons will only be allowed in extreme cases.

The rules were drafted after eight people were hospitalized when police clashed with workers from a steel plant during a protest against redundancies in Rome late last month.

There were also clashes between police and protesters on Monday in Brescia, where Italy’s Prime Minister Matteo Renzi gave a talk to local business people.