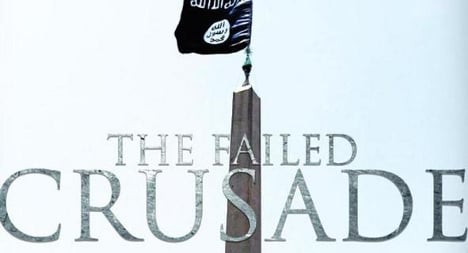 A photo on the cover of the Isis propoganda magazine, published in October, shows its black flag superimposed on the obelisk in St Peter’s square. Photo: Twitter

The pair, said to be from North Africa, first came to the attention of officials when a car, believed to have been driven by them, sped past traffic police on Rome’s ring road on Sunday night, Corriere reported.

The car was later found abandoned, with two guns inside.

Police then traced the owner of the car, which led them to an apartment in Infernetto, a hamlet between Rome and Ostia.

There they found the extremist group’s black flag, and a map of Rome with various locations encircled.

The discovery comes less than a month after Isis published a photo of its flag superimposed on the obelisk in St Peter’s square on the front cover of its propaganda magazine, ‘Dabiq’.

Italy stepped up security in September following threats from the group, with Interior Minister Angelino Alfano saying that the threat posed by Isis is equal to that of terrorist organization al-Qaeda after the September 11th attacks against the US in 2001.