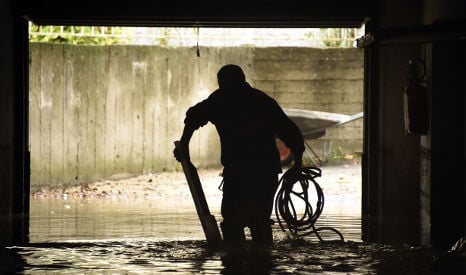 Nine people have died in floods in Italy over the last month. Photo: Olivier Morin/AFP

At Moscazzano, southeast of Milan, emergency services recovered the body of a 36-year-old local council employee near a mill where he had been trying to prevent flood waters from reaching a nearby restaurant.

Further north, a man in his 70s drowned in Lake Maggiore Wednesday after falling in while trying to secure his boat at the port of Ispra.

Earlier in the week, landslides killed three elderly people, a couple whose house was swamped in the coastal region of Liguria, and one near Turin. All three of those deaths are subject to manslaughter investigations focused on whether the tragedies could have been avoided.

This week's deaths take to nine the number of people killed in weather-related accidents in northern Italy in the last month. Some of the fatalities have been blamed on poor infrastructure.

Although the rain eased up Thursday, more than 60 schools remained closed in Milan alone and many streets were flooded after the Seveso and Lambro rivers burst their banks.

Emergency services are fearful that the Po river, the biggest in the area, could follow suit. After a brief respite, heavy rains are forecast to resume over the weekend.