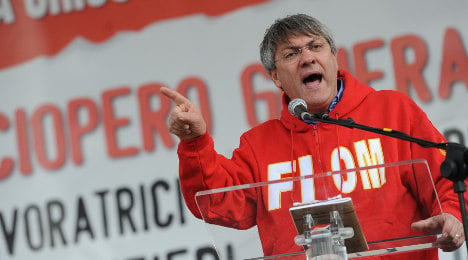 Maurizio Landini, the Secretary General of the Fiom, insisted that the unions were not acting as a brake on reform. Photo: Andreas Solaro/AFP

The CGIL grouping urged Italy's other main union blocs, the CISL and the UIL, to back its call for the eight-hour shutdown in both public and private sectors on December 5th.

A section of the CGIL, the Fiom, which represents workers in the steel and related industries, has already called for strikes and demonstrations in northern Italy this Friday and in the south a week later.

The main focus of union anger has been Renzi's plans for a shake-up of Italy's labour market via the so-called Jobs Act currently going through parliament.

The draft legislation is designed to make it easier for companies to hire and fire – a step the government argues will lead to higher employment levels over time.

The austerity elements of a package that also includes tax cuts for the poor and employers have increased recently as a result of the economy teetering on the brink of a third recession in six years.

Maurizio Landini, the Secretary General of the Fiom, insisted that the unions were not acting as a brake on reform.

"We are not saying 'no' simply for the sake of it," Landini told reporters in Rome. "We are also offering solutions to the serious problems of our country."

Landini said the union movement supported some of Renzi's proposed changes, including speeding up the notoriously snail-like judicial system.

But he said such measures had to be accompanied by more strategic planning of the economy's direction.

"We need a real industrial policy. Where are the national plans for for transport and for broadband?" he said. "Why don't we have a national plan for the steel industry which is of huge importance if we are to preserve our industrial base."

Buoyed by strong backing in the polls, Renzi has so far shrugged off the union protests, saying after a major protest in Rome at the end of last month that: "The time when a demonstration could block government policy has gone.

"If the unions want to negotiate they should get themselves elected."

Renzi's allies were quick to point out that the unions had hedged against a low turnout by calling the general strike for December 5th, a Friday which falls at the start of a long holiday weekend (the Monday, December 8th, is a public holiday).