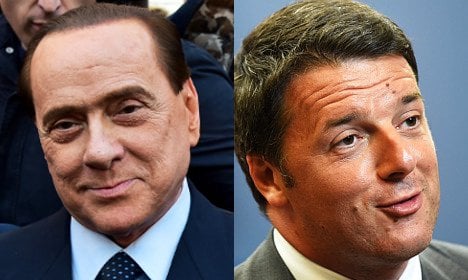 Under an accord between the youthful centre-left premier and his disgraced right-wing predecessor, a new electoral system law designed to guarantee strong governments with clear parliamentary majorities could be approved by Christmas.

"Italy needs an institutional system that guarantees the ability to govern [and], a clear winner on election night…," Renzi and Berlusconi said in a joint statement.

The announcement confirmed that the unlikely pact the two leaders have forged on Renzi's broad reform agenda remains in place, after a couple of months in which it had appeared to be unravelling.

Much detail still needs to be ironed out but essentially the new electoral law proposed by Renzi will hand the party which tops national polls a working parliamentary majority.

In parallel with this, the 39-year-old premier wants to make the task of governing much less complicated by stripping the upper house Senate of the extensive powers it currently enjoys to block and amend legislation.

In their joint statement, the two leaders said the understanding between the premier's Democratic Party and Berlusconi's Forza Italia "is today more solid than ever."

They said that they had agreed on a legislative roadmap under which the electoral law should be approved by the Senate before Christmas and the constitutional reform required to amend the powers of the second chamber by June 2015.

Under the new system, a party which wins a general election with more than 40 percent of the popular vote will automatically benefit from a "winner's premium" of extra seats to give it a parliamentary majority.

In the event of no party achieving this, there will be a run-off vote between the two biggest parties.

Other elements of the electoral reform include new thresholds for parliamentary representation designed to reduce the number of small parties and encourage an evolution towards a two-party system on British or American lines.