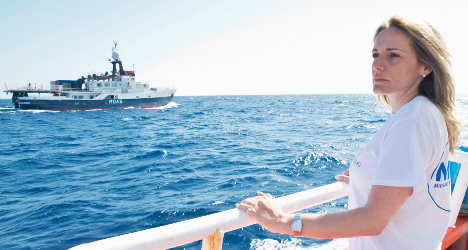 "I go to church, I pray, but I'm not a religious freak," says the joint founder of Moas, a unique humanitarian venture that owes its existence to a combination of Pope Francis's inspirational turn of phrase and a chance encounter with a winter coat separated from its owner in tragic circumstances.

Moas stands for Migrant Offshore Aid Station. Essentially, it is a boat, albeit a pretty sophsticated one.

The 40-metre Phoenix I boasts a helipad designed to accommodate camcorder drones capable of surveying 600 square kilometres of ocean in a six-hour flight as well as a multinational crew of sailors, security experts, a doctor, some paramedics and a cook.

Moas may not be the biggest enterprise in the world but its human balance sheet is firmly in the black.

Since the end of August, the Malta-based NGO has rescued nearly 3,000 migrants who might otherwise have perished trying to cross the Mediterranean on overcrowded, barely sea-worthy vessels.

For now however, Moas's search-and-rescue operations in waters that have claimed the lives of more than 3,300 migrants this year alone are suspended pending the outcome of a fund-raising operation that Catrambone and her American husband Christopher hope will enable the Phoenix to resume its mission in the Spring.

"Chris and Regina's idea when they set up Moas was to show what could be achieved when there is a will," said the charitable foundation's director, Martin Xuereb, a former Chief of Staff at Malta's Ministry of Defence.

"They bought the boat, they paid for it to be equipped and they have funded this year's operations.

The Catrambones run an insurance and services business for workers in global hotspots. They were happy to dig deep into their savings after being brought face-to-face with the Mediterranean's darker side while on holiday last year.

"We had rented a boat and we were travelling to Tunisia when I saw this winter jacket floating in the sea," Regina recalled.

"It was an odd sight in the middle of summer so I asked the captain where it might have come from. He told me that, almost certainly, it had belonged to someone who had passed away.

"It was a reality check: here we were relaxing and enjoying ourselves in the same sea that people were dying in, trying to find a new life."

The experience planted an idea that grew stronger after the Pope's visit to the Italian island of Lampedusa in July 2013.

On his first trip out of Rome, the new pontiff railed against the serial drownings on Europe's southern shores and the "globalization of indifference" that had allowed them to happen.

"What we heard from Papa Francesco made us want to follow his lead," Regina said.

"He is so simple and approachable. He gets down off his pedestal. Everyone should be like him."

Three months after the Pope's visit, more than 360 Africans died on a sinking, burning ship off Lampedusa in a disaster that catapulted the Mediterranean's migrant crisis onto front pages.

Italy reacted with Mare Nostrum, a naval search-and-rescue operation that saved tens of thousands of lives before being abruptly ended at the end of last month after Rome's European Union partners baulked at helping to fund the €9 million per month it cost to run.

Against a backdrop of further infighting over whether MN was actually making the problem worse, the Italian operation has been replaced by a scaled-down EU mission called Triton whose mandate is restricted to waters within 50km of the bloc's southern coastline.

"Effectively we have gone back to the situation that existed before the Lampedusa disasters and no one knows what will happen next year," said Xuereb.

The Moas director dismisses the idea, advanced by some EU governments, that operations like his increase the 'pull' factor drawing migrants towards Europe by reducing the risk involved in the final leg of their perilous journeys.

"That rationale is flawed," the retired brigadier said. "There are now more displaced people in the world than there were at the end of World War II. Desperation is the biggest 'push' factor there is and that is what we have to focus on.

"But we don't want to get involved in any finger-pointing – these are world problems, not just Europe's. We are just trying to solve our little bit of the puzzle."

Watch a video about Moas: