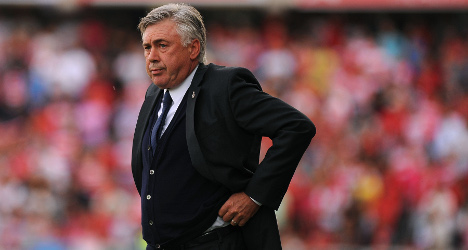 Italy is trailing behind all the other big European leagues," said Carlo Ancelotti. Photo: Jorge Guerrero/AFP

Italy's once revered top flight, a former haven for the finest purveyors of the 'beautiful game', is in crisis mode – and big names from Johan Cruyff to Carlo Ancelotti are among those ringing the alarm bells.

"Serie A has to become more attractive. Nowadays, you can watch any league championship on television," Ajax and Barcelona legend Cruyff said this week in an interview with Gazzetta dello Sport.

Milan legend Ancelotti, who led the Rossoneri to their seventh and last Champions League triumph in 2007, underlined the failure of Italy's legendary clubs to keep up with more astute foreign rivals.

"When Italy began dominating the European scene other countries, like Germany, started thinking about how to catch up," the Real Madrid coach said in a recent interview with French football magazine So Foot.

"The English had already started by modernizing stadiums. Now, Italy is trailing behind all the other big European leagues."

Just over a decade ago, three Italian teams – Juventus, Milan and Inter – qualified for the semi-finals of the 2003 Champions League with Milan beating Juventus to the title after a penalty shoot-out.

Now, Italians teams are considered lucky to reach the last eight of a competition whose financial rewards mean it is crucial for any club hoping to lure the game's top stars.

Inter Milan were Italy's last winners in 2010, when Jose Mourinho led the Nerazzurri to an unprecedented treble. Since then, only Juventus have made it to the quarter-finals, losing to eventual winners Bayern Munich in 2013.

Then coach Conte declared: "We have to look elsewhere, to Spain, to England and to Germany to see what lessons we can learn."

Three-time European champions Inter have failed to reach the Champions League competition for the past two seasons while seven-time winners Milan, who missed qualification this season, are now a pale shadow of the club that once attracted stars like Jean-Pierre Papin, Ruud Gullit, Andriy Shevchenko and Zlatan Ibrahimovic.

Milan city Mayor Giuliano Pisapia admitted: "In Milan right now, there are a lot of disappointed fans, but times have changed. We're all feeling the effects of the recession.

"Investment possibilities have dipped and fewer people are now going to the stadium."

With the exception of Juventus, few clubs in Italy can afford the big names who lure fans to the stadium. Once considered part of the average fan's Sunday ritual, for many it is now a thing of the past.

The possibility of watching foreign league games via satellite television, smartphones and tablets offers fans the chance to watch the world's best in Spain, England and Germany at a fraction of the price.

Coupled with sporadic episodes of football-related violence and the comparative lack of modernity at Italy's football stadiums, it means a trip to "il stadio" is not so enticing as it used to be.

A recent study found that Italian clubs reap, on average, only 11 percent of their revenue from stadium receipts. It is almost double elsewhere (23 percent in England, 23 in Germany and 22 in Spain).

Outspoken Palermo president Maurizio Zamparini said: "Going to the stadium should be enjoyable, where you can go with your family. Nowadays, in Italy it's like walking into a prison."

Ancelotti believes attracting fans back to the stadium is crucial. "For me, the stadiums and how they are run is key. Television rights [money] is important, but not decisive," he added.

"The number of people coming to watch games is a far more more important factor than television rights. Look at England, the stadiums are always full. In Italy families are too afraid to go to the stadium."

Dutch legend Cruyff said Juventus, who have won the last three Serie A titles, are the "only club capable of overcoming the crisis".

"They have a different philosophy and, importantly, have built their own stadium which allows the club to manage it on their own and balance the books," he said.

"The other Italian clubs don't have money. They are are investing less in grass roots football and buying fewer big names."

Despite the inherent economic constraints, Bogarelli believes league chiefs must revolutionize their key "product" if they are to grab a slice of the competitive global market.

"The market for Real Madrid and Barcelona, once Latin-American has now gone global. Serie A doesn't have a Cristian Ronaldo or a Lionel Messi, so you have to invent something else," he added.

"We need to encourage fans to spend more time in the stadium. Much like a consumer in a shopping mall."