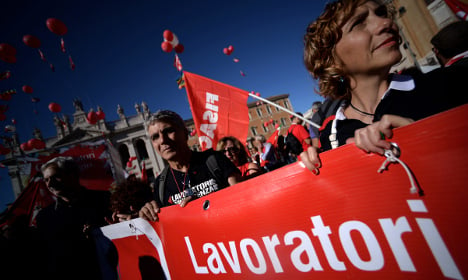 Riot police in Milan came under fire from flares before their batons came down on protesters, who were marching forward behind a banner about education.

In Rome, officers outside the German embassy were covered in eggs and red paint, as a protest leader declared his opposition to the "politics of austerity".

The rallies were held in opposition to “the politics of liberalism and austerity,” Cobas spokesman Piero Bernocchi said in a statement.

“No to the politics of the Renzi government and the EU, no to the Jobs Act, the Stability Bill, the school plans and the Unblock Italy decree,” he added.

Higher pensions, a guaranteed minimum wage, investment in public services and greater housing rights are just some of the union’s demands.

As Italians took to the streets, strikes halted public transport in a number of cities including Milan, Rome and Turin, in the latest in a series of protests by Italians unhappy with government reforms.

As many as a million people marched through Rome in October, protesting against Renzi’s revamp of the labour market. The premier has faced most resistance to plans to scrap Article 18, a law which protects workers and Renzi argues creates a barrier for young jobseekers.

Unionists are also gearing up for a general strike on December 5th against Renzi's so-called Jobs Act. The eight-hour walkout was announced on Tuesday by Italy’s biggest trade union group (CGIL).