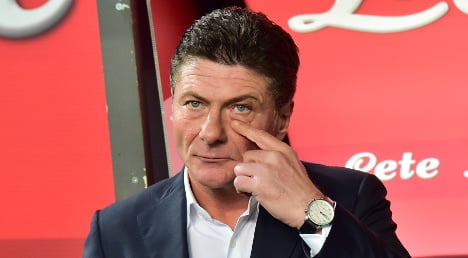 A short statement by the club on www.inter.it said: "F.C. Internazionale announces that Walter Mazzarri has been relieved of his duties as first team coach.

"The club would like to thank Mazzarri for the commitment, dedication and professionalism he showed over his 17 months in charge. Today's training session will be taken by Giuseppe Baresi."

The announcement followed reports that Mancini, who won three league titles in a successful four-year spell with the club, was on the verge of signing a two-and-a-half year deal to take over the Nerazzurri.

Although the club have yet to confirm Mancini as coach, former Inter goalkeeper Walter Zenga, practically did so when he posted a message on Twitter claiming that he had also been in the 'frame' for the job.

"They have chosen Mancini. I was in the frame, my dream was close. It's a pity, maybe in another life. Thanks to everyone," said Zenga.

Former Manchester City manager Mancini has been out of work since leaving Galatasaray last season but, if confirmed, will be welcomed with open arms by fans frustrated by Inter's failure to perform to expectations under Mazzarri.

Mazzarri, who led Napoli to the Serie A runner-up spot in 2013, joined Inter in time for the start of last season but despite glimpses of promise had consistently seen his side underperform.

Inter, Italy's last Champions League winners, in 2010, failed to qualify for the competition under previous coach Andrea Stramaccioni, and Mazzarri fared no better last season when Inter could only qualify for the Europa League.

Inter have won only four Serie A games so far this season while suffering heavy defeats to Cagliari (4-1 at home), Fiorentina (3-0 away) as well as falling 2-0 away to relegation candidates Parma.

Recent reports claimed that Inter president Erick Thohir, the Indonesian businessman who bought a 70 percent stake in the club a year ago, had given Mazzarri until the Milan derby next week before deciding the 53-year-old Mazzarri's future.

However Mancini is now expected to be appointed in time to take charge of Inter's San Siro clash away to their city rivals a week on Sunday.

Serie A action resumes next weekend following the international break.