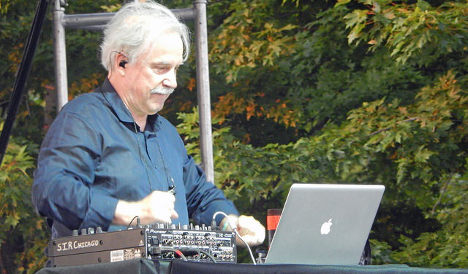 Giorgio Moroder, one of the pioneers of synthesized dance music, has announced his first album in three decades. Photo: Swimfinfan

The 74-year-old Italian producer said that his album, to be released early next year, will feature a collaboration with prominent singers including Britney Spears, Kylie Minogue, Charli XCX and Sia.

The gray-haired Moroder released a first track from the album on Monday entitled "74 is the New 24," which is driven by a pulsating dance beat as a computerized voice repeats the catch-phrase in the song's title.

Starting in the late 1960s, Moroder was one of the first musicians to use synthesizers to create dance beats and melodies, which spawned a genre that packed nightclubs.

Moroder, who started his career in Germany and later moved to Los Angeles, eventually refined his electronic dance sound with his own albums, some released under the stage name Munich Machine.

At the same time, Moroder produced some of the most memorable hits of the 1980s including Blondie's "Call Me" and Berlin's "Take My Breath Away" from the movie "Top Gun."

He has won three Oscars – for the songs "Take My Breath Away" in 1986 and "What a Feeling" from the 1983 album "Flashdance" as well as for best original score for the 1978 film "Midnight Express."