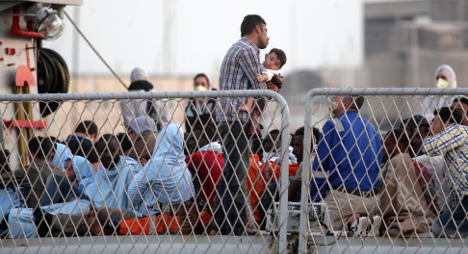 Sofas and widescreen televisions in once opulent suites of the Villa Mokarta hotel in Salemi have been replaced with beds for up to eight migrants a room, their only possessions tatty rucksacks, trainers and the odd Bible or Koran.

"Tourist reservations had dropped way under 50 percent so we decided to give housing immigrants a go instead," manager Salvatore Cascia told AFP.

Since February he has been in charge of the welfare of some 140 asylum seekers, for the most part from West Africa and Bangladesh.

The government gives Villa Mokarta and hundreds of structures like it across Italy €30 a day per migrant, €2.50 euros in pocket money and the rest earmarked for bed, board and services such as Italian lessons, psychological care and legal assistance with applying for asylum.

This new hospitality business, which currently houses over 32,300 migrants according to the interior ministry, is worth close to €1 million a day.

"Here we eat, do some sport and free our minds," Ebou Cham from Gambia told AFP as he lifted weights with a sports instructor in a make-shift gym in the hotel, which also boasts table football, Sky television, free wifi and a vegetable lot run by the immigrants.

The daily workout "helps to forget about many things we leave behind, the things that make us come here," said the 21-year old, who washed up on Italy's shores in January after a harrowing three-month journey across desert and sea.

The villa is one of 32 beachside or hill-top hotels, holiday resorts, former schools and old people's homes which have been transformed over the past 12 months into immigrant centres in the Trapani region in western Sicily.

Hotel manager Cascia, 56, said the venture was bringing "much-needed oxygen" to the local economy in the south, which is suffering its worst recession since the Second World War, according to the economic research centre Fondazione Curella.

But in Sicily as in many other Italian regions, there is growing resentment over the presence of immigrants. Minors housed in a centre on the outskirts of Rome had to be moved to safety last week after local residents attacked their centre.

And with over 150,000 people landing on Italy so far in 2014 – and more boats incoming – other structures are expected to open.

'A river of money'

Aid organizations such as the Catholic charity Caritas have warned that crime groups in the poverty-stricken mafia heartland may be exploiting the system to pocket much of the funds.

"There's a river of money, millions of euros, handed out without tenders and without checking whether the structures have anti-mafia certificates," said Mario Michele Giarrusso, a Sicilian senator from the Five Star Movement (M5S) political party.

"It's an enormous scandal and in a land like Sicily, an incredible risk," he said, adding that police investigations had been launched into centres found to be keeping migrants in cramped spaces on dirty beds and giving them only white rice to eat.

Don Sergio, head of Caritas in Palermo, said not only were "many trying to make money off these poor devils," but they were cutting corners on services like psychological care, essential for those fleeing war zones and persecution.

"These are people who have been exploited, raped – and not just women. They have come to Italy for a better future, but if you don't help them they can get agitated and it can end in violence," he said.

Italy has repeatedly been found to lack sufficient guarantees concerning facilities for asylum seekers, with the European Court of Human Rights joining the UN's refugee agency and Council of Europe in voicing concerns this month.

One of the biggest complaints is the lengthy wait to have asylum requests examined and permits granted, a problem Italy blames on a paperwork backlog.

Figures published this week show Rome received 25,401 applications between January and June – nearly as many as it did in the whole of 2013.

"I've been here for nine months, and it's really tiring eating, sleeping, eating, sleeping. I owe the Italian people, they rescued me from the sea, I want to work and contribute," said Lamin Colley, 22, a Villa Mokarta resident.

Giarrusso says the issue is more complicated than red tape alone. He points the finger at a local mafia boss – born in the Trapani region and a fugitive on Italy's most wanted list – saying he is behind centres which "spring up from morning to night".

"The interest is to open as many as possible and keep the migrants there. The longer they keep them, the more money they bring in," he said, adding that there were reports of volunteers at some centres being stalked and threatened if they tried to blow the whistle on corruption.

"It's a business all right. These migrants die in the Strait of Sicily just to bring millions of euros to the mafia," he said.