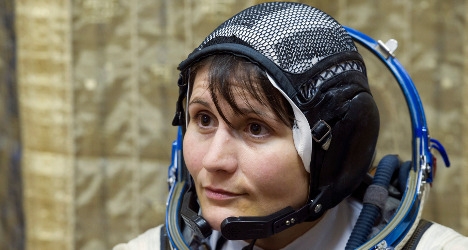 Samantha Cristoforetti, a 37-year-old military pilot from Milan, is a member of the European Space Agency’s Mission Futura and is to spend six months on the International Space Station conducting up to 200 experiments and activities.

“I think it’s fair to say I have prepared all my life for this space mission,” Cristoforetti said in a video interview released by the European Space Agency and aired on Ansa.

“Since I was a child I started dreaming of becoming an astronaut.”

Cristoforetti is due to be launched with two other crew members on the Russian Soyuz TMA-15M spacecraft on Sunday evening from Baikonur in Kazakhstan.

“I started dreaming of becoming an astronaut when I was very young,” Cristoforetti said

“Growing up in the 1980s, most of my role models were of course American astronauts and Russian cosmonauts. So it was very important for me in 1992, when the first Italian flew to space. As an Italian it meant my dream came a little bit closer. ”

Cristoforetti has spent the past two years preparing for her mission and sees herself as a role model for other women and girls since she is one of the few women astronauts in Europe and currently the only active one.

“For a lot of young women I am a kind of role model, especially for those who aspire to pursue careers in aerospace or science and technology,” she added. “ I see that as a privilege and also a responsibility.”

Cristoforetti is the third woman astronaut in the European Space Agency and the documentary follow her through a rigorous training and preparation.

Selected in 2009 for the European Space Agency program, Cristoforetti graduated in mechanical engineering at the University of Munich and also studied in France and Russia.

But she insists she hasn’t changed much since her career developed.

“It’s been a big change in my life being selected as an astronaut and training for the international space station, it’s been an enriching experience,” she said.

“But I think the core of myself has not changed that much. I find comfort in meeting old friends from previous times in my life. I don’t think it has affected who I am."