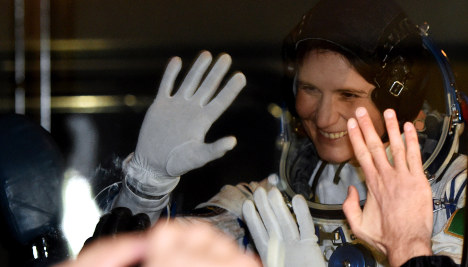 Samantha Cristoforetti is on her way to the International Space Station. Photo: Kirill Kudryavtsev/AFP

"Soyuz safely in orbit, next stop ISS," Nasa wrote in a tweet, while live images of the launch showed Virts giving the thumbs up and smiling.

Cristoforetti, Virts and Shkaplerov were to dock around six hours after taking off at the space station where they are to live until May 2015.

Their voyage also mean substantial food supplies, with nearly half a kilo of caviar in their baggage and an espresso machine.

"There will be 15 boxes of 30 grammes each of caviar, but also apples, oranges, tomatoes and 140 doses of freeze dried milk and black tea without sugar," a space station official was quoted as saying by Russian press agency Tass.

Astronauts on the station will also finally be able to enjoy a decent brew thanks to the 20-kilogramme machine designed by famed Italian coffee makers Lavazza and engineering firm Argotec, which specialises in making space food.

Cristoforetti, 37, who is also a captain in the Italian airforce, "will be not only the first female astronaut from Italy to go into space, but also the very first astronaut in the history of the conquest of space to savour an authentic Italian espresso in orbit," the two companies said in a statement.

In total 16 countries work on the ISS, including Russia and the United States, which finance most of its operation. A team of astronauts is always aboard, with stays of up to six months.

Launched into orbit in 1998, this outpost and orbiting laboratory, which cost $500 billion (€404 billion) to build, saw its lifespan extended by another four years by Nasa. It's now expected to remain in service until 2024.

Nasa depends entirely on Russia to send its astronauts to the ISS, which costs the United States $70 million (€56 million) per person in Soyuz rockets.