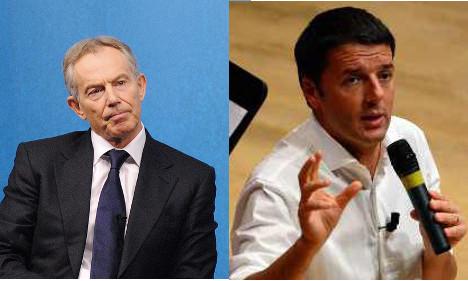 In an interview with Sky TG24 HD, Blair said Renzi is "one of the new European leaders who has the courage to change things. I applaud what he’s doing, which is absolutely right for Italy and for Europe."

Blair added: "When you make changes, it seems like hell. But then after you’ve done it, you want to do more."

The praise will no doubt please 39-year-old Renzi, who said before becoming leader that he took inspiration from Blair.

After being crowned secretary of the Democratic Party last December, Renzi was also called ‘Italy’s Tony Blair’ in the Italian press, due to his youthful charisma.

More recently, however, he’s been compared to Britain’s 'Iron Lady' Margaret Thatcher, over his controversial plans to make it easier for companies to hire and fire.

Blair was elected prime minister in 1997 at the age of 43, the UK’s youngest leader since 1812, after years of conservative rule.

His election came during ‘Cool Britannia’, a period of renewed pride and optimism in the UK following two turbulent decades.