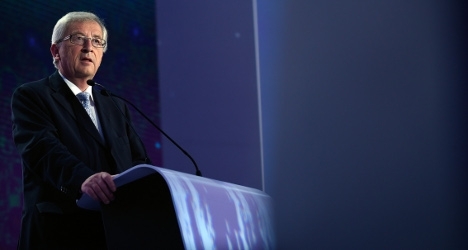 France in particular had made "limited progress", the commission said, referring to the fact that Paris is set for a deficit of 4.3 percent of GDP in 2015, way above the EU.

Four other countries – Spain, Malta, Austria and Portugal – were also at lesser risk of meeting the rules imposed after the eurozone debt crisis.

The Commission, the EU's executive branch, was delivering official opinions on euro government budget plans for 2015 under those new powers.

New European Commission chief Jean-Claude Juncker said in an interview with several European newspapers earlier that he had decided to give France, Italy and Belgium more time to make reforms.

"I made a choice not to sanction because that would have been easy," he said.

But Juncker insisted that the Commission remained tough on budget overspending.

In long conversations with the French and Italian leaders, "I made it clear that I don't want only promises but a clear calendar," the former Luxembourg premier said.

The assessment "will not be a very friendly one for at least one of the two countries," he warned.

Juncker's pullback comes as fears are growing that the state of the economy in the 18-nation eurozone could spread to other parts of the world.

The bloc is caught in a slump of near-zero growth, near-deflation and high unemployment.

The Commission's tolerance, expected in an announcement at 10.00 GMT on Friday, risks angering an impatient Germany, frustrated with the slow pace of reform in Paris and Rome.

But the international call for the EU to step away from austerity is growing.

The OECD on Tuesday urged more flexibility in fiscal rules for struggling EU members like France and Italy in order to prevent another recession.

Last month, France and Italy barely avoided having their budgets humiliatingly sent back for serious breaches. France is set for a deficit of 4.3 percent of GDP in 2015, way above the EU ceiling of three percent.

Expectations were that the Commission would order urgent action in detailed opinions on Friday, especially with France having already won several delays to meet EU deficit rules.

But in a change of strategy, it will now only give an initial "opinion" without delving into next steps, an EU official said.

These opinions are to "engage a conversation" before deciding a plan of action delivered in May or June.

It is only at this point that the rule breakers could face penalties under the EU's new powers.

According to the plans, the Commission will this week divide eurozone countries into groups, with France and Italy, but also Spain and Portugal, identified as non-compliant of the EU's budgetary rules.

The extra time puts pressure on the embattled government of French President Francois Hollande to implement tough reforms that have only been announced for now.

It was these letters that won the few months of reprieve, another European source said.

In Brussels, deep divisions have emerged over how to handle the Paris government's failure to meet its commitments.

"It would not be credible to extend the deadline without asking for very clear, concrete steps in return," said Oettinger, who is a close ally of austerity-touting German Chancellor Angela Merkel.

The OECD, which provides economic advice to its 34 industrialized members, on Tuesday recommended fiscal leniency for France and Italy.