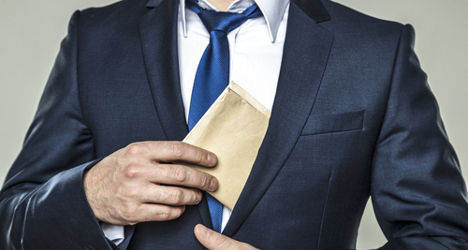 Showing no improvement on last year, Italy was ranked alongside Bulgaria, Greece and Romania out of 31 EU and western Europe nations in the Corruption Perception Index, based on expert opinion.

Globally, Italy came in 69th place out of 174 countries; being viewed as equally corrupt as Brazil, Senegal and Swaziland.

Scandinavia is perceived as the least corrupt part of the world, with Denmark, Finland, Sweden and Norway taking the top five spots alongside second-place New Zealand.

Valentina Rigamonti, Transparency International’s senior regional coordinator for Europe, told The Local that few improvements have been made in the past two years.

She drew on Milan’s Expo trade fair, being probed for contract rigging, as a high-profile example of the country’s corruption problem.

But Italy does have “very good legislation”, she said, such as the 2012 Severino law which was used to ban Silvio Berlusconi from office after a tax fraud conviction.

The government, however, needs to up efforts to implement existing anti-corruption laws, while new measures are also essential.

Rigamonti highlights Italy’s notorious statute of limitations, under which crimes “expire”, as a key area to work on. Prime Minister Matteo Renzi said last month the law needed to change, after the conviction of a Swiss billionaire over thousands of asbestos deaths was overturned.

“The strengthening of whistleblowing legislation” is also a key ask from Transparency International.

“At the moment the whistleblowing rules are stronger in the private than public sector, but there is no legal protection,” Rigamonti said.

In a timely example of the reality behind Italy’s dismal score, the country’s financial police on Wednesday revealed a “cash for exams” scam at Rome’s largest university.

La Sapienza University’s architecture faculty is under investigation for handing out fake traineeship certificates, course credits and exam results in exchange for money. Those involved in the scam face charges including extortion, abuse of office and embezzlement.

The index also comes a day after authorities announced a probe into a mafia-type organization at Rome’s city hall. Former mayor Gianni Alemanno and ex-terrorist have been put under investigation, while €200 million worth of assets were seized by police.