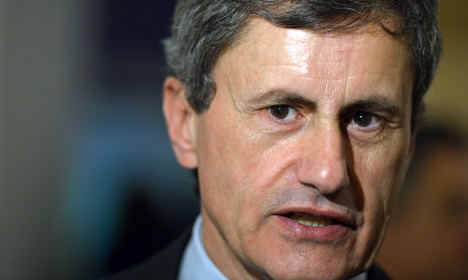 The Italian capital's infamous Magliana crime gang – which wielded enormous influence in Rome in the 1970s and 80s – appeared to be back.

Investigators said they were casting their net wider to include the entire Lazio region around Rome after 100 prominent businessmen and politicians were named on Tuesday in a probe into a mafia-style criminal network that police believe held sway over Rome's city hall.

The city's former mayor Gianni Alemanno, who is under investigation along with the city's current anti-corruption chief Italo Walter, suspended himself from his party, the Brothers of Italy-National Alliance which has roots in the Fascist party of former dictator Benito Mussolini.

But of the 37 suspects arrested all eyes were on mastermind Massimo Carminati, who was given a ten-year prison term in 1998 for belonging to the Magliana and has been dubbed "last king of Rome" by his fellow criminals.

Carminati, 56, who lost an eye in a shoot-out with police and goes by the nickname "the Pirate", has been described by local media as the "black soul" of the Roman underworld.

"His name is whispered with fear throughout (the city)… where he continues to be hailed as an arbiter of life and death, of street trafficking, of (political) deals in the attics of Parioli," Rome's wealthiest neighbourhood, mafia expert Lirio Abbate told political weekly L'Espresso.

"He survived a bullet to the head, winning him the reputation as an immortal. So they all fear him, and it is thanks to this fear that Massimo Carminati is considered the last king of Rome," said the author and journalist, who lives under police protection.

Carminati is a former member of the Nuclei Armati Rivoluzionari (Armed Revolutionary Nuclei), a far-right group that was involved in the 1980 bombing of Bologna railway station which left 85 people dead.

According to Valerio Fioravanti, who served time for the bombing, he was "always ready to kidnap someone, commit murder, take part in drug trafficking or racketeering."

Several mafia turncoats have accused Carminati of multiple murders but he has displayed a remarkable knack of staying out of prison.

While he shunned expensive or flashy clothes and cars, police seized goods worth €200 million ($246 million) during a raid on Carminati's property, including art works by Andy Warhol and Jackson Pollock.

Investigators believe that as well as rigging contracts given out by municipal authorities, the mafia network also conspired to skim off cash from centres established to house asylum seekers and recently-arrived migrants.

Carminati's right-hand man, Salvatore Buzzi, who was also arrested, was caught on a police wiretap asking a fellow suspect "have you any idea how much I earn from the migrants? The drug trade is less profitable."

Allegations of dirty deals between businessmen and local politicians and the suspicion of the rigging of large public contracts sparked outcry among consumer rights groups who said citizens were already being punished enough by the financial crisis.

"The investigation into the 'Mafia capital' reveals a disgusting, horrifying situation which goes beyond even the darkest hypothesis," Adusbef and Federconsumatori said in a joint statement, describing it as "a democracy emergency".

The wire-taps of Carminati and his associates provide a revealing insight into the extent of the gangster's influence over Rome's city hall.

One recording reveals how a henchman had problems getting access to Antonio Lucarelli, the then-mayor's chief of staff.

He calls his boss to complain and several minutes later takes a return call. "Go back to city hall at three and Lucarelli will come outside and see you," a voice police believe was that of the mobster is heard to say.