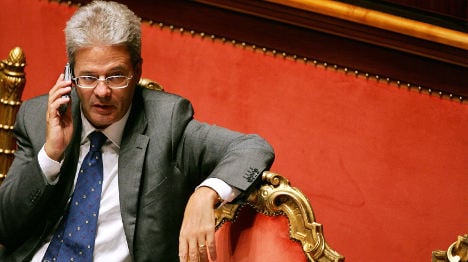 Speaking to journalists in Rome, Gentiloni stressed the importance of Russia as a business partner to Italy and said a “political solution” needs to be reached through “dialogue at all levels”.

“We respect the sanctions, they are an instrument, but we need to arrive at a political solution.”

But he added that the successful outcome of dialogue depends on Russia.

“We can’t close our eyes to the reality: there has been a violation that we cannot tolerate, and the progression of any dialogue depends on the availability of Russia.

“There needs to be direct dialogue between Moscow and Kiev, towards Ukraine regaining sovereignty.”

During his annual state-of-the-nation address at the Kremlin on Thursday, Russian President Vladimir Putin said the West used the annexation of Crimea, which took place in March, as a pretext to continue its historical attempts to restrain Russia.

He also showed no regret for the annexation, saying the territory had “sacred meaning” for Russia.

The country's economy has been hit hard by the sanctions as well as a drop in oil prices.

A Russian embargo on food imports, meanwhile, is also having a huge impact on Italian exporters.

The Italian oil giant, Eni and oil services company, Saipem, are also set for losses after Russia earlier this week suspended the multi-billion euro South Stream pipeline project, which would channel gas to Europe from Russia.

Gentiloni said Italy would need to wait and see over the next few weeks whether the project will be completely scrapped, adding that country's energy resources are diverse enough not to be dependent on the project.

Italy has often been accused of being a moderate supporter of the sanctions against Russia.

Yury Barmin, an independent political analyst on Russia, told The Local in November that it is unlikely that the country would want to support further sanctions because “a lot of Italian businesses are suffering already, especially in agriculture”.