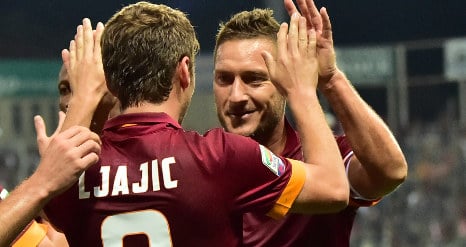 Roma looked to have taken a huge step towards reaching the knockout phase when Francesco Totti scored a 43rd minute free-kick over another Group E rival CSKA Moscow a fortnight ago.

However, Roma took their eye off the ball in the dying seconds of the match and Vasily Berezutsky's floated cross evaded the entire Roma defence before sneaking inside Morgan De Sanctis's far post.

The late equaliser was likened to "a (Mike) Tyson punch" by Totti, who in Moscow extended his record as the competition's oldest scorer at 38 years and 59 days.

While Roma know a win secures their place in the last 16 other results can also see them go through.

A draw would also be sufficient, although Roma would then need CSKA to draw away to Bayern.

Thanks to their 1-1 draw at City in September, Roma can also go through with a scoreless draw against City, but only as long as CSKA lose to Bayern.

Any other result would almost certainly see Roma eliminated, although Garcia has insisted the Italians are thinking positively.

"Our destiny is in our hands, and we have to make the most of this great occasion," said the Frenchman.

"We're not making calculations, all we're focused on is beating City."

City travel to the Italian capital without Sergio Aguero, who limped off after just 75 seconds into a 1-0 home win over Everton at the weekend with knee ligament damage that is expected to keep him out for most of the rest of the season.

Aguero, the Premier League's top scorer with 14 goals and who also revived City's last 16 hopes with a hat-trick in a 3-2 win over Bayern last month, will be sorely missed by Manuel Pellegrini's side.

But midfielder James Milner believes City have enough firepower to cause Roma problems, and enough experience throughout the squad to deal with a potentially hostile atmosphere.

"Sergio is very, very difficult to replace but we have a lot of firepower. With the players we do have up there I'm not too worried," Milner said on Monday.

"We will go there to win. It won't be easy – Roma are a good team and I'm sure it will be a great atmosphere.

"I've played in Italy before with City and England and you get a hostile atmosphere. You look at the experience we have in this squad, and that sort of atmosphere won't bother anybody."

If City caught a glimpse of Roma's last outing, they would be right to believe in their chances of claiming the win that could secure their ticket to the next round.

At home to Sassuolo on Saturday, a reshuffled Roma conceded twice in the first 18 minutes thanks to a brace of goals from Simone Zaza.

Garcia's men managed to pull level at the death thanks to an Adem Ljajic brace, but only after Gervinho, Radja Nainggolan and Seydou Keita made late substitute appearances.

Ahead of what will be the Frenchman's biggest challenge since taking over as coach at the start of last season, Garcia could make up to six changes from the team that started against Sassuolo.

Right-back Maicon is expected to return while Davide Astori should replace either Mapou Yanga-Mbiwa or Kostas Manolas in one of the  centre-back positions.

Keita could come in for Daniele De Rossi while Nainggolan is expected to start for Kevin Strootman.