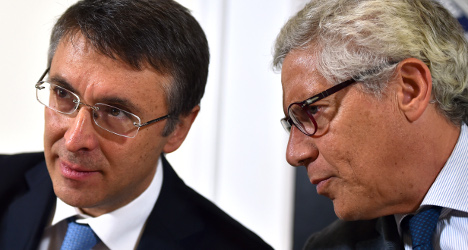 Cantone, president of the National Anti-Corruption Authority (Anac), said the rating would be used to convince businesses to turn down lucrative bribes.

“We’re convinced that the choice of legality must be incentivized.

“We need to begin to say to those who behave, that this is not only an ethical, moral and painful choice, but can also be positive,” he told journalists in Rome.

Under the new measure, business owners can choose to be reviewed by Anac in the hope of being awarded the top three-star rating. The aim is to boost the competitiveness of Italy’s most virtuous companies.

Giovanni Pitruzzella, the president of Italy’s Antitrust Authority, said both public and private firms can sign up to the voluntary programme.

“It’s not only for those who don’t commit crimes, but for those who create positive initiatives for a culture of legality,” he said

Under Renzi’s proposals those involved in corruption will face harsher prison sentences and it will be easier for authorities to seize their assets.

Speaking on Thursday, Cantone said hitting criminals’ pockets was essential to fight corruption: “I’m not interested in people going to prison, it’s a lot more useful to confiscate their assets.”

Around €200 million in assets were seized in Rome last week, the ill-gotten gains of a mafia group that allegedly corrupted city hall.

Thirty-seven people were arrested earlier this month in the probe, dubbed “Mafia Capital”, while dozens more are under investigation including former mayor Gianni Alemanno.

The arrest of two people on Thursday – named as Rocco Rotolo and Salvatore Ruggiero – further revealed the depths of corruption at city hall. The duo are accused of acting as intermediates between the Rome mobsters and southern Italy’s ‘Ndrangheta mafia, one of the world’s most powerful organized crime groups.