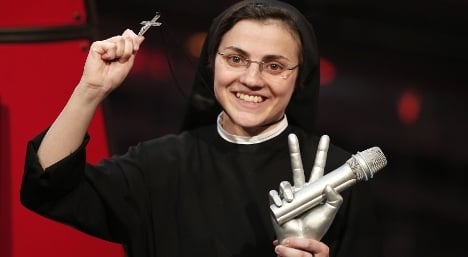 The pair shook hands and chatted before Suor Cristina passed over the CD gift, adorned with a Christmas bow.

Suor Cristina became the darling of the nation earlier this year when she appeared on The Voice reality TV show, wowing judges with a rendition of Alicia Keys No One.

Shunning showbiz glitz, the Sicilian stayed dressed in her nun habit and went on to win the singing competition.

But Suor Cristina has since caused controversy, by picking a remake of Madonna’s Like A Virgin for her debut album. She denied having “any desire to provoke or cause a scandal” with her reworking of the 1984 hit, saying it had been transformed into a “secular prayer”.

The song features on the new album given to the pontiff, along with other covers of famous pop songs.

Pope Francis could, however, give the gift away, having announced last month he was to auction off unwanted presents. A Fiat Panda and a coffee machine are among the items up for grabs at the papal fundraiser, to benefit a homeless charity set up by the Vatican.

READ MORE: Pope to raffle off gifts to help the homeless